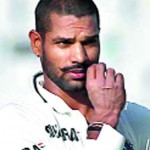 Born on December 5, 1985, Shikhar Dhawan is an Indian international cricketer. He is a left-handed opening batsman and occasional right-arm offbreak bowler. He made his First-class debut for Delhi in November 2004. Dhawan made his international debut against Australia in October 2010 (at Visakhapatnam) and after nearly 3 years he made his Test debut against the same opposition in March 2013 at Mohali and scored the fastest century by any batsman on Test debut (187 runs off 174 balls).
He currently plays for the Sunrisers Hyderabad club in the Indian Premier League.
Dhawan played for India in the 2004 U-19 Cricket World Cup where he was the leading run scorer. His total of 505 runs from seven innings is a record for a single U-19 World Cup. He made his runs at an average of 84.16 with three centuries and was named the Player of the Tournament.
He made his ODI debut against Australia in Visakhapatnam in October 2010 after several senior players were rested. He opened the innings in the run-chase. He did not score from the first ball and was bowled off the next by Clint McKay.
He made his T-20I debut against West Indies in June 2011 tour at Queen’s Park Oval, under captaincy of Suresh Raina and opened along with debutant wicket-keeper Parthiv Patel in which he scored 5 of 11 deliveries faced before being caught behind to keeper Andre Fletcher off captain Darren Sammy. In 2013 IPL Super successor player in the Sunrisers Hyderabad.
In the 1st ODI of the tour, with India needing 215 to win, he scored a 51 of 76 balls (3 fours, 1 six) before being held at the deep-mid wicket by Lendl Simmons of leg-spinner Anthony Martin. It was his maiden ODI fifty. He made his Test debut against Australia on 14th March 2013 receiving the cap from Sachin Tendulkar and replacing out of form Virender Sehwag. 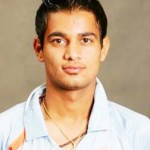 Questions of this week:
1. How much target Sri Lanka chased while defeating England in the league match of the ongoing CLT20 Championship?
2. For which team Mohit Mahipal Sharma played in Indian Premier League Season-6?
3. By How many wickets England lost its league match of CLT20 against Sri Lanka?
4. Name 2 teams which have reached finals of Salute and Tribute T20 Cricket Tournament?
5. Who is Ankeet Chavan?
Answers of the last week:
1. India 2. Rajasthan Royals 3.  2 wickets 4.  Simula 5.  Jharkhand speedster.
The best entry of this week was received from Nand Naman, S/o Dr DD Dogra, C/o Shashi Kumari, Sub Post Office Shakti Nagar, Udhampur.
The other entries of the week were from Sanjay Dhar from Lane No 1, H No 3, Upper Laxmi Nagar, Jammu, Tushar Mahajan of H No 55, Lower Laxmi Nagar, Sarwal, Jammu, Amit Sharma from Pouni Chak, Jammu, Aniket Gupta, Jammu and Arun Sharma, Trikuta Nagar, Jammu.