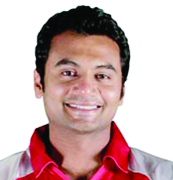 Born November 19, 1984 in Himachal Pradesh Pradesh, Paras Dogra is an Indian Cricketer, who has been prolific run-getter for Himachal Pradesh from last so many seasons. Dogra made his debut in First-Class cricket in 2001. He is a right-handed batsman and a right-arm leg-break bowler.
In 38 First-Class matches, Paras Dogra has scored 2049 runs, with an average of 34.15, including 4 centuries and 5 half-centuries, with a top score of 123 runs. In 39 List-A matches, Dogra has made a total of 1247 runs, with an average of 46.18, including one century and 10 half-centuries, with a top score of 109 runs.
He was signed by the Rajasthan Royals in the Indian Premier League. In the 2010 IPL season, he made his debut in IPL.
He played 9 matches in the third season scoring 107 runs with the average of 13.38 his top score was 41 he hit 4 fours and 5 sixes in the whole season.
Hailing from Palampur in Himachal Pradesh, 30 year old, middle-order batsman has won many matches for his State, since making debut in 2001.
Experts believe that Paras possessed all those qualities and skill that are required to blossom at the highest level.
For his extra-ordinary performances, Paras got the BCCI Zonal seelctors nod many and time and for that matter, has represented North Zone in Duleep and Deodhar Trophy more than once. But is yet to get the National selectors nod to represent the Country at the highest level. 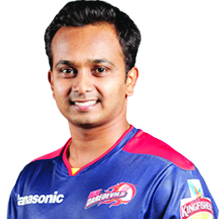 Questions of this week:
1.        On which date IPL-8 will commence?
2.        For which team Paras Dogra played in IPL-7?
3.        Which district emerged overall winner in 7th J&K State Indian Style Wrestling C’ship?
4.        Who is the general secretary of Hockey J&K?
5.          Who is SDA Drabu?
Answers of the last week:
1. MS Dhoni 2. KKR 3. Steve Smith 4. Mr Raina 5. One of the Founders of the game of cricket in J&K.
The best entry of this week was received from Puneet Wattal, Patoli Mangotrian, Jammu.
The other entries of the week were from Sanjay Dhar, Lane No 1, H No-3, Upper Laxmi Nagar, Sarwal Jammu; Subhash Sharma, Domana, Jammu; Sanjay Pradhan, Gorkha Mohalla, Bahu Fort, Jammu; Ravinder Sharma, Trikuta Nagar, Jammu; Satish Kumar, New Plots, Jammu.