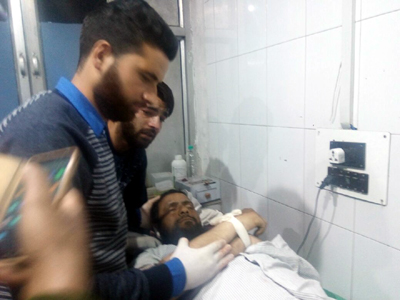 Fayaz Bukhari
Srinagar, Mar 29: A Special Police Officer (SPO) of Jammu and Kashmir Police was killed while his wife was injured as militants fired at them in Bijbehara area of South Kashmir’s Anantnag district this evening.
Militants fired at SPO Mushtaq Ahmad Sheikh at his residence in Katsoo village of Bijbehara at around 8.25 p.m. Sheikh who was posted at Police Post Sangam and his wife Fareeda were injured in the attack.
They were removed to Bijbehara hospital for treatment where Sheikh died while his wife was referred to Srinagar for treatment.
Soon after the incident, a joint team of security forces launched a hunt to nab the assailants.
A 25-year-old Madrassa teacher was shot at by gunmen at Khandaypora area of South Kashmir’s Kulgam district this evening.
Gunmen fired upon one Sayer Ahmad Wani son of Manzoor Ahmad Wani, a resident of Chancer village in Kuldgam district of South Kashmir outside the local mosque at around 8:45 pm.
Sayer, working as a teacher at the local Madrassa at Khandaypora, had gone to local mosque for offering prayers and was returning towards the Madrassa when he was fired upon by the gunmen.
He sustained bullet wound in one of his leg and has been admitted in district hospital for treatment. His condition is said to be stable. A case has been registered and investigations taken up.
And in the meantime, after observing suspicious movement near 3 RR army camp at Watchi in Shopian district this evening, Army personnel on duty fired some 8 to 10 rounds in air.
Militants were travelling in Swift vehicle bearing registration number JK13D 0744 and owned by one Nisar Ahmad Mir resident of Yader Shadimarg Pulwama. The militants fled away leaving behind the vehicle.
Soon after the incident, there was a rumour about the killing of a militant in the incident and residents of Ahgam, Shopian came out to protest against it. Army allegedly fired at the protesters injuring one Shahid Nazir Bhat of Krawara Shopian, He received bullet in his leg and has been referred to Bone and Joints hospital Srinagar for treatment.
And unidentified persons set ablaze seasonal huts of Army’s 44 RR at Doubjan on Mugal road in Shopian district of South Kashmir. The army establishes seasonal camp during summer (April to November)  and abandons them in the winter.