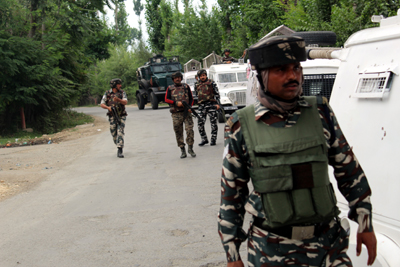 Fayaz Bukhari
Srinagar, June 27 :A Special Police Officer (SPO) decamped with his service rifle from police station Pampore in Awantipora area of South Kashmir’s Pulwama district to join Hizbul Mujahideen.
The SPO identified as Irfan Ahmad Dar of Nihama, Kakapora in Pulwama, was escorting the SHO Pampore. He    went missing from the police station along with an AK-47 rifle and ammunition last evening.
Click here to watch video
Police said that they are ascertaining the incident and investigations are on. A joint team of Army and SOG launched a massive manhunt to trace out the missing cop. Meanwhile, Hizbul Mujahideen militant outfit claimed that the SPO joined their ranks.
In the meantime, during last night 2-3 militants barged into the houses of two SPOs Shakir Ahmad Bhat (No 304/SPO) and Sajad Ahmad Ahanger (No 655/SPO) at Bellow Pulwama and beat up them. They threatened and asked them to quit their jobs.
Militants tonight lobbed a grenade at police station Pulwama in South Kashmir’s Pulwama  district. However, there was no report of any damages. A police official said that at around 8:20 pm militants threw grenade on police station Pulwama. The grenade hit a water tank. The security guard on duty fired in air and militants fled.  A search operation was launched against the militants responsible for the attack.
Militants today fled from cordon in Bellow village of South Kashmir’s Pulwama district.  Army’s 44 RR, 183 battalion of CRPF and SOG laid cordon around Bellow village following inputs about the presence of militants in the area. As the cordon was being laid, militants fired on the security forces who retaliated and fled from the cordon.
A large numbers of residents gathered and pelted stones and bricks on troops during the search operation. The security forces fired pellets and tear gas shells to quell the protests. The operation continued till evening and was called off when no militants were found.
Security forces this evening cordoned off orchards in Watoo village of South Kashmir’s Kulgam district after inputs about presence off militants in the area. As they were laying cordon, militants fired at the troops and fled. However, the cordon and searches are on.