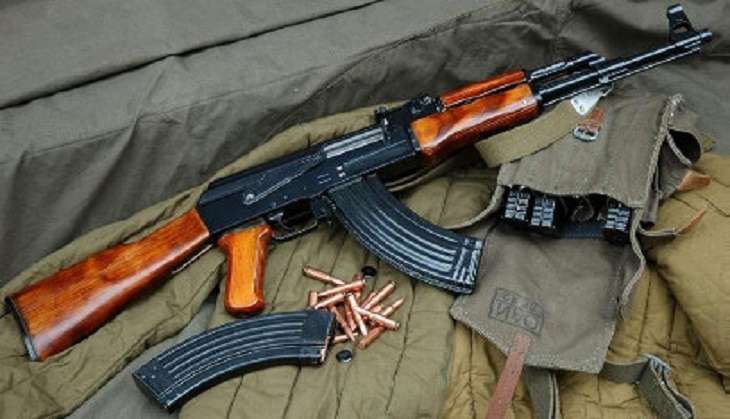 Fayaz Bukhari
Srinagar, Sept 28: A Special Police Officer (SPO) this morning decamped with seven assault rifles and a pistol from residence of a legislator at Jawahar Nagar, Srinagar.
SPO Adil Bashir this morning decamped with the service weapons of security guards of MLA Wachi Aijaz Ahmad Mir including seven AK-rifles and one licensed pistol of the MLA from the guard room at J-11, Government Quarters Jawahar Nagar.
The MLA is in Delhi for last two weeks and his eight security guards including Selection Grade Constable Abdul Hamid, Constable Manzoor Ahmad, Constable Farooq Ahmad, SPO Azad Ahmad, SPO Asif Ahmad Rather, SPO Imran Ahmad, SPO Rayees Ahmad and SPO Adil Bashir had gone home as soon as the MLA left for Delhi.
Sources said that all of them had kept their weapons at the residence of MLA in Jawahar Nagar. “However, this morning at around 10 a.m. SPO Adil Bashir who is from the native village of the MLA, working as cook at his residence, came and cooked food for himself. He took weapons to a nearby lane behind the quarter in a dustbin twice and handed them to militants who were waiting in a car”, sources said.
“Adil Bashir, however, came back after handing over the weapons to the militants. He had lunch before fleeing from the residence of the MLA. He told the security guards at the gate that he will come back tomorrow morning as Mir is returning from Delhi in the afternoon tomorrow”, sources said.
In the evening, when one of the security guards arrived at J-11, he found boxes in which weapons were kept open with rifles missing. He informed the Police Station Rajbagh about the incident.
Senior Police officers, including SSP Srinagar and SP South arrived at the MLA’s residence and they immediately called the security guards of the MLA and three of them Selection Grade Constable Abdul Hamid, Constable Manzoor Ahmad, Constable Farooq Ahmad who are from Srinagar arrived. These cops including three security guards at the residence are being questioned about the circumstances in which Adil decamped with the rifles and a pistol.
Adil Bashir Sheikh, 24, (Belt No. 488/SPO) originally belongs to Zainpora, Shopian district. A case has been registered in addition to the departmental inquiry. Sheikh was engaged as SPO on March 11, 2017, he said.
An alert has been sounded across the Srinagar district and the routes leading to South Kashmir. Security forces also launched searches at multiple places in Srinagar and its outskirts.
A police spokesman said: “Today Personal Security Officer of MLA Wachi Aijaz Mir approached Police Station Rajbagh and stated that the weapons of 7 Personal Security Officers, who are attached with MLA Wachi, have allegedly been missing from his residence at Jawahar Nagar including 7 AK-47 rifle and 1 pistol which is a licensed personal weapon of Aijaz Mir. He also alleged the role of SPO Adil Bashir of Zainpora, Shopian in the commission of crime”.
“On this, Police Party has reached the place of occurrence and taken the cognizance of matter. Also a case FIR No 57/18 has been lodged in Rajbagh police station and investigation has been initiated”, he said.
Director General of Police (DGP) Dilbagh Singh this evening announced a reward of Rs 2 lakh for anyone who provides information about the SPO.
This is for the first time in Kashmir that an SPO decamped with eight weapons. Earlier, an SPO had decamped with 4 weapons of his colleagues.
Meanwhile, three persons, including a brother of a militant, were arrested by Police in South Kashmir’s Pulwama district today while normal life was disrupted in Valley over the killing of a civilian in Srinagar.
Police said that two over ground workers of Hizbul Mujahideen were arrested by Awantipora police following a credible input. Those arrested were identified as Danish Ahmad Lone son of Ghulam Mohammad Lone, resident of Brah Bandinah, Awantipora and Raja Ilyas Makroo, son of Ghulam Mohammad Makroo resident of Arwani Bijbehara Anantnag. “Incriminating material including huge amount of cash was recovered from them”, Police added. Danish is the brother of active militant Adnan Lone.
“Police has registered a case. Preliminary investigation suggested that the duo were planning to carry out attacks in the area”, a Police spokesman said.
The spokesman said that on a specific tip-off, they arrested Irshad Ahmad Malla son of Abdul Khaliq Malla resident of Kranzbal Tral. “Huge quantity of incriminating material linked to militant outfits was seized from his possession. Police has registered a case under relevant sections of law and further investigation is in progress”, the spokesman added.
Security forces today launched a search operation in Onagam village of Bandipora following inputs about presence of militants.
The searches were launched by Army’s 27 RR unit and Special Operation Group (SOG) of Jammu and Kashmir police. However, no one was arrested and the operation was later called off. Minor clashes also erupted in the area as security forces were tightening the cordon.
In the meantime, normal life was affected in Kashmir today due to a shutdown called by the separatists against the killing of a civilian during a cordon-and-search-operation in Srinagar yesterday.
Shops, commercial establishments and schools were closed in Srinagar while public transport was off the roads.
However, private vehicles kept plying on the roads.
Authorities imposed restrictions in parts of Srinagar to prevent any protests. Police and CRPF erected barricades to prevent movement of people and vehicles in the area.
The separatist leaders Syed Ali Shah Geelani, Mirwaiz Umar Farooq and Yasin Malik had called for shutdown and protests today against the killing of Saleem Malik during an operation in Noorbagh area of Qamarwari yesterday morning.
Jammu and Kashmir Liberation Front (JKLF) Chairman Mohammad Yasin Malik was detained to prevent him from leading any protests against the killing of the civilian. He was lodged at Kothibagh Police Station.
Hurriyat (M) chairman Mirwaiz Umar Farooq today lashed out at the authorities for not allowing congregational prayers at Jamia Masjid in downtown Srinagar for the second consecutive week.