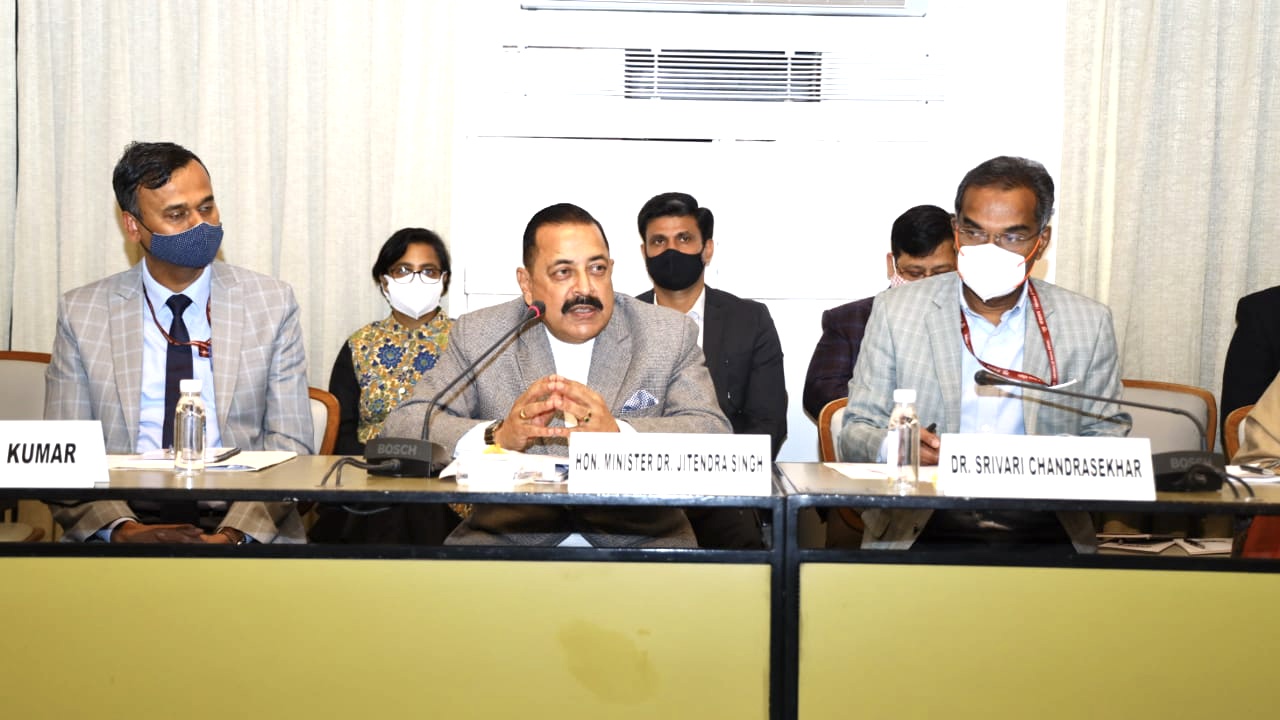 NEW DELHI, Feb 15 : Union Minister of State (Independent Charge) Science & Technology; Minister of State (Independent Charge) Earth Sciences; MoS PMO, Personnel, Public Grievances, Pensions, Atomic Energy and Space, Dr Jitendra Singh today said that under the Modi Government’s SVAMITVA scheme, Space/Geospatial technology along with Drones will survey all the over 6 lakh Indian villages. At the same time, pan-India 3D Maps will be prepared for 100 Indian cities, which will be a game-changer, he added.
Speaking as chief guest commemorating the 1st Anniversary of the “Release of new Geospatial Guidelines”, the Minister said that the Trinity of Geospatial Systems, Drone Policy and Unlocked Space Sector will be the hallmark of India’s future economic progress. He said, this is in line with the strategic push by the Government of India for adopting these sunrise technologies across national mission-mode projects to achieve the vision of the $5 trillion economy.
Dr. S.Chandrasekhar, Secretary, DST, Agendra Kumar, President of Association of Geospatial Industries (AGI), Sanjay Kumar, Founder and CEO, Geospatial World, Rakesh Verma, Chairman and MD, MapMyIndia, Sajid Malik, Chairman and MD, Genesys, Prof Bharat Lohani, IIT, Kanpur, representatives from Google, Hexagon and other Industry members and officials joined the event.
Dr Jitendra Singh informed that Geospatial Policy will be announced soon as the liberalisation of the guidelines has yielded very positive outcomes within one year’s time. He said, open call for empanelment of Geospatial companies by Survey of India for mapping 6 lakh villages under the SVAMITVA scheme and the launch of pan-India 3D Maps Program by Genesys International for 100 cities, based on the concept of Digital Twins are historic and revolutionary in nature and will be a game changer decision. The Minister also drew attention to the launch of Indo ArcGIS by Esri India to address the need for ready-to-use GIS-based solution products and content in the areas of Forest Management, Disaster Management, Electrical Utilities, Land Records, Water Distribution, and Property Taxation.
Dr Jitendra Singh said, Prime Minister Narendra Modi believes in breaking the taboos of the past and he is known for taking out-of-the-box and bold decisions be it the unlocking of Space sector for private players, joint ventures in Atomic Energy or Drone Policy. He said, the focus will be to strengthen the Innovative Starts-up ecosystem with huge financial implications and job generation. The Minister assured the stakeholders that a synergy will be brought about in all these sectors to have a multiplier effect.
Dr Jitendra Singh said, Geospatial technologies are the nation’s “digital currency” that find dynamic application into multiple sectors like Infrastructure, Manufacturing, Health, Agriculture, Urban Planning, Highways, and Service Delivery. He said, the size of the Indian Geospatial market in 2020 as per one industry estimate was INR 23,345 Crore including INR 10,595 Crore of export which is likely to grow to INR 36,300/- Crore in 2025.
Dr Jitendra Singh said, in an era of knowledge explosion and rapid technological changes, India has to live up to the Global Benchmarks. He said, the era of working in status quoistmode is over as PM Modi’s arrival heralded a new work culture of moving with dynamism of the world.
Dr Jitendra Singh said that Government of India’s vision for a $5 trillion economy by 2025 and Atmanirbhar Bharat rests on the key pillars of Make in India and Digital India. He said, all the bold decisions in Space, Atomic Energy, Drone and the liberalisation of Geospatial data by the Guidelines have been a key driver behind these industry milestones, having boosted engagements, collaborations, and innovations on the pillars of transparency and efficiency.
In his concluding remarks, Dr Jitendra Singh said that open and easy access to Geospatial information has helped in maximising the use and reuse of data within a single year of its launch. We hope to see many more innovative solutions and new business models in the coming times building value upon existing resources. He said, the Department of Science and Technology has truly triggered a systemic change within the Geospatial ecosystem with these guidelines. The Minister appreciated the efforts of DST and AGI in bringing together all stakeholders today to discuss the impact so far and the way forward with a reformed outlook in mind.