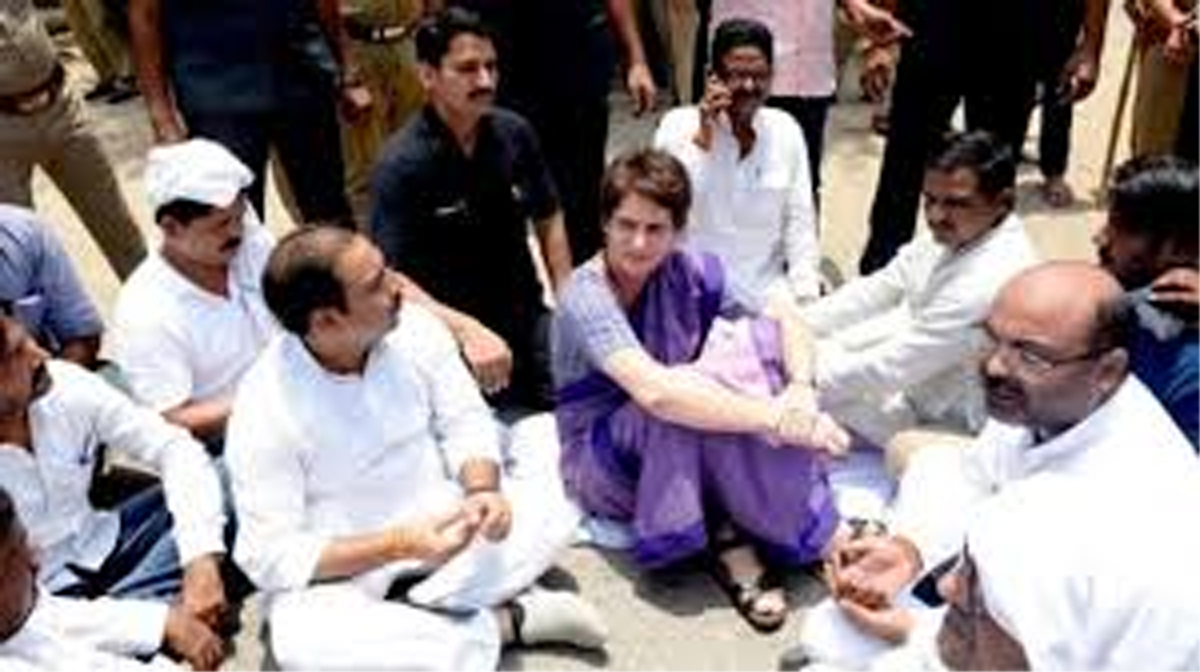 MIRZAPUR/LUCKNOW, July 20: Expressing anger over members of the aggrieved families from Sonbhadra being stopped from meeting her, Congress leader Priyanka Gandhi Vadra Saturday said they have come here in “great grief” and should at least be allowed a meeting.

The Congress general secretary remark came after 15 family members of Sonbhadra clash victims were stopped from entering the Chunar guesthouse where she spent a night in detention.

Earlier, twelve family members of the clash victims were allowed to meet her.

“Some of them were allowed, but rest of the 15 persons from the family of the aggrieved were stopped at the gate… They have come in grief, I am saying please at least allow them to meet ” Gandhi told reporters.

Some people who came to meet Priyanka Gandhi also claimed that they were stopped from meeting her.

Gandhi consoled the aggrieved family members while sharing their sorrows.

She wiped tears of the family members, and also offered water to them.

Some of them who came to meet her also clicked photos to treasure the moment.

Ten people were gunned down and 28 injured in the clash between supporters of Ubbah village head Yagya Dutt and Gond tribals over a piece of land in Sonbhadra’s Ghorawal area on Wednesday.

On Friday, Priyanka Gandhi was stopped from going to Sonbhadra and detained. She spent the night at the guesthouse, turning down all requests of the local administration to return without meeting the families of the clash victims.

In a late-night tweet, she said she is ready to go to jail if she is not allowed to go ahead.

The second round of talks held between the Congress leaders and local administration late in the night proved futile and Gandhi preferred staying back in the guesthouse along with her supporters, the party sources said Saturday.

“I have clearly stated that I have come here not to violate any law but to meet the victims,”she said and also posted a video showing the officials leaving Chunar Fort in Mirzapur at 1.15 AM.

In another tweet, she said that her advocates have told her that her detention is totally illegal.

“They (officials) are sitting with me for around one hour.They did not tell me the ground of detention nor showed any papers,” she said.

The Congress general secretary also shared a video of aggrieved Sonbhadra families mourning the death of their near ones. “Is it a crime to wipe these tears?” she asked in a tweet.

Congress legislature party leader Ajay Kumar Lallu who was with Priyanka told PTI that water and power connections were cut in the night to force the Congressmen to return but they remained at the guest house insisting on permission to meet the victims.

“At around 4.30 AM, Priyanka Gandhi sat with the party workers. The government had made no arrangements for breakfast at the guest house.Local residents and party workers are making arrangements,” he added.

In Lucknow, Congressmen spent the night at the GPO Park before the statue of Mahatma Gandhi in solidarity with Gandhi.

“We will continue to sit here till Priyankaji is kept in the guesthouse in Mirzapur and not allowed to meet the victims,” party spokesman Anshu Awasthi said.

Priyanka Gandhi was Friday detained and stopped from going to Sonbhadra where 10 people were gunned down this week, triggering a standoff with the BJP government in Uttar Pradesh.

The administration detained her under 151 CrPC citing prohibitory orders and brought her to the guesthouse. (PTI)