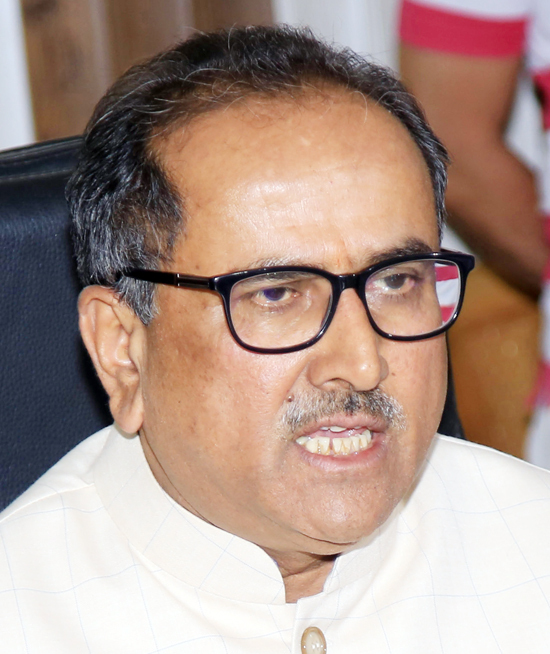 Avtar Bhat
JAMMU, Apr 19: Making a scathing attack on Pakistan and some forces within the State working on behest of neighboring country to disturb peace, Deputy Chief Minister, Dr Nirmal Singh today said that they are hell bent on polarising the situation in the State as they are desperate since the formation of PDP-BJP coalition.
“I won’t agree with you that the situation has polarized in the State since PDP-BJP came to power”, Dr Singh retorted at a reporter who said that the situation has polarized in the State after the PDP-BJP came to power. The Deputy CM was interacting with media persons here, this afternoon.
The Deputy CM said that some forces “working at the behest of Pakistan including Hurriyat Conference tried to polarize the situation in the State on the beef issue, resettlement of Kashmiri Pandits and Sainik Colony.”
He said PDP represents Kashmir and BJP Jammu and the people of the State are for brotherhood and peace. These forces are now trying to polarize the Rassana issue also, he added.

Click here to Watch Video
He said the murder of eight year old girl in Rassana village is a heinous crime and condemnable but the stone pelters backed by Hurriyat and Pakistan got chance to defame the country. Terming the murder of the girl an act of beasts, he said giving communal colour to it is totally unfortunate and condemnable.
Dr Singh said that the BJP  and Government’s stand on the Rassana murder is same that the death of a minor girl is condemnable.  “We want justice should be given to the girl”. On CBI probe into the Rassana incident, he said people have apprehensions that probe was not proper but the matter is in the court of law and if court will issue directives “we will order CBI probe”.
He also said that the Rassana case can be outcome of a                 conspiracy at national as well as international levels but people of Jammu deserve all praise who defeated the designed of vested elements to disturb peace and amity.
He said like other issues, the Congress tried to politicize the Rassana issue also as on one side the party protested and on the other side they took out a candle march. They tried to politicize the Lingayats issue in Karnataka also, he added.
On the resignation of two BJP Ministers Ch Lal Singh and Chander Parkash Ganga over Rassana issue, he said that the issue was projected wrongly. They went there on behalf of party to defuse the situation and there was some mistake in projecting the case. This was also stated by BJP national general secretary, Ram Madhav during his recent visit to the State, he added.
Giving a clean chit to both the Ministers, he said that they resigned on moral grounds.
Lambasting the BJP adversaries for trying to polarize the situation on Rassana issue, he said Advocate B S Salathia is closely linked to AICC senior leader and Leader of Opposition in Rajaya Sabha , Ghulam Nabi Azad who gave a bandh call first day and next day took out candle light procession.
He said in Rassana murder case first Government ordered magisterial probe, then CB investigation and still if some one has doubts they can approach the court of law for CBI probe and the Government will adhere to that.
On the stone pelting and growing terrorist incidents in Valley, Dr Singh made it clear that Indian Government is for pace and gun is no solution to any issue. “But if the terrorists still use gun thinking it is the solution our soldiers will reply them in the same way”, he added.
The Deputy CM made it clear that the country is not going to tolerate the terror. He accused the Hurriyat and other forces who are inimical to unity and integrity of India of supporting terrorists in the Valley.
On the Supreme Court verdict on Justice Loya’s death that it was a natural death and not a murder, he said that Apex Court also showed concern that Congress tried to politicize it.
Dr Singh said that Congress which ruled the country for over 60 years is responsible for present situation in the country. Accusing the Congress of giving hollow slogans on secularism, he said they tried to give communal and caste colour to every situation for their political interests.
The allegation leveled on BJP national president Amit Shah in this regard proved false he said, adding after the defeat in 2014 elections the Congress is in great desperation. Prime Minister Narendra Modi is a popular leader and his popularity has been acknowledged not only in India but abroad as well.