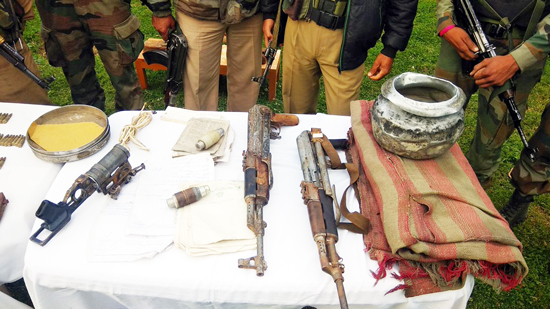 Excelsior Correspondent
DODA, Apr 19: Army personnel along with sleuths of Jammu and Kashmir Police (JKP) busted a militants’ hideout in Majmi area of Dessa, here today.
As per defence spokesman, acting on specific intelligence inputs, Army personnel alongwith JKP cops launched a search operation in Majmi area of Dessa today.
“The joint parties cordoned off the area and carried out meticulous search during which they succeeded in locating a natural hideout of terrorists in a cave containing a huge cache of war like store including weapons and ammunition”, spokesman added.
He stated that during the search operation, one AK 47, one AK 56, five magazines of AK 47/56, one UBGL, two UBGL grenades, 289  rounds of 7.62 mm, ammunition of AK 47/56 and Hizbul Mujahideen’s donation receipt book and papers in Urdu language were recovered.
The recovery of war like stores has dealt a severe blow to the nefarious designs of militants to revive terrorism in the area, he said, adding that Army will continue with its persistent operations to keep Doda district safe and free from terrorists as well as their support infrastructure.