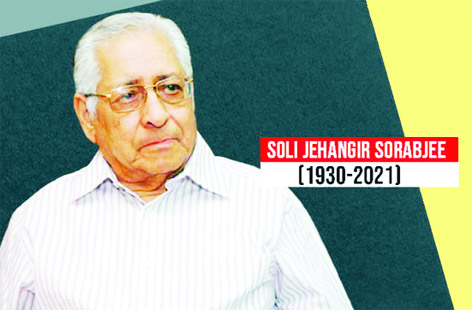 Varun Chugh
Former Attorney General, Soli Jehangir Sorabjee, 91, one of India’s finest lawyer, passed away recently at a hospital in New Delhi, where he was undergoing treatment for Covid-19. He was born on March 9, 1930, in erstwhile Bombay to Parsi Family. He was an alumnus of the St. Xavier’s College and Government Law College.
He could have easily lived a life of luxury and leisure however, he chose the law as his primary profession and he joined the chambers of great Jamshedji Kanga, in 1953. The legal battles and his appearances in historical cases brought Sorabjee to India’s highest court late in the 1970s.
He was twice appointed Attorney General of India. He was given India’s Second-Highest civilian award, Padma Vibhushan, in the year 2002 for his defense of freedom of speech and the protection of human rights. He was worldwide recognized as the genius of his profession. He was appointed as Special Rapporteur for Nigeria in 1997 to report on the human rights situation in that country by the United Nations. He has also served as a member of the Permanent Court of Arbitration at the Hague from 2000 to 2006. He was a leading proponent of freedom of speech and expression.
He was part of several high-profile cases, including Golaknath and Keshavananda Bharati, that shaped the Indian Constitution. He joined jurist Nani Palkhivala to fight Keshavananda Bharati case in the Apex Court that led to the Indian Constitution’s legal doctrine ‘Basic Structure’. For the first time, in this case, the bench of 13 judges of the apex court sat to decide a case and held in the Keshavananda case that amendments should not alter the constitution’s ‘basic structure’.
He worked with the citizen’s Justice Committee and pro bono defended victims of the 1984 anti-Sikh riots. He also appeared before the Supreme Court in certain landmark cases like Maneka Gandhi v. Union of India (1978), SR Bommai v. Union of India (1994), BP Singhal v. Union of India (2010), etc.
He mentored and promoted many of his juniors who in later life held key positions in legal field. Harish Salve, who was appointed as Queen Counsel for the Courts of England last year and Wales, was his junior and paid warm tribute to Soli by saying “Will miss Soli Sorabjee as I miss my father”
Condolence messages started pouring in moments after Sorabjee’s death broke. The President, the Prime Minister and many senior lawyers mourned his death. The newly appointed Chief Justice of India NV Ramana said, “I am deeply saddened to learn about the passing of Shri Soli Jehangir Sorabjee, former Attorney General of India. In his nearly 68-year long association with the judicial world, he made immeasurable contribution in enriching the global jurisprudence of human rights and fundamental rights.”
The author is practising lawyer in Supreme Court
feedbackexcelsior@gmail.com

Lockdown times : A lot to do and understand