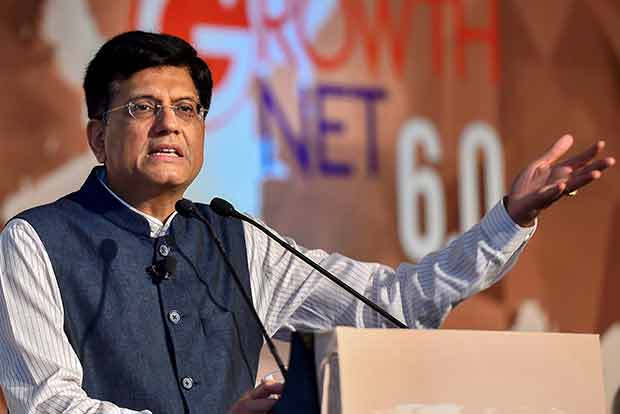 NEW DELHI, July 26: Efforts are on to make Indian Railways the first Green Railways in the world in the next 10 years with steps like setting up solar energy installations on its unutlilised land, electrification of tracks and moving to bio-diesel, Minister Piyush Goyal told Rajya Sabha.
Replying to supplementaries during the Question Hour, he said there was no proposal at present to change Railway fares, after the recent hike in diesel costs due to increased excise duty in the general budget.
The minister said the Railways had set the target of 100 per cent electrification of its tracks by 2022.
He informed the House that Railways was reducing its diesel cost inputs by electrifying its tracks on a large scale and will also produce solar energy on its vacant land.
“Probably 10 years from now, can we make Indian Railways the world’s first 100 per cent Green Rail,” he said announcing that this was yet another ambitious plan and efforts may take some time to fructify.
“We are trying to see how we can expand the solar energy on all the unutilised land of the Railways across the country, as it will save the land from encroachments. We are trying to produce power from such solar installations and feed that into the grid and use that for the Railways,” he said.
Responding to criticism by members about “grand announcements” made by the minister, Goyal said, “Unless you aspire for big goals, you cannot achieve big targets”.
He said the Railways was fast electrifying its tracks and was regularly bringing its diesel inputs down.
“By 2022, we are going to do full electrification of Railways,” Minister of State for Railways Angadi Suresh Channabasappa said.
In response to another supplementary on whether the Railways intends to raise its fares, Goyal said there is no such proposal now.
“At present, there is no proposal to change the fares,” he said. The minister said during 2013-14, the Railways has electrified 650 kms of track, while in 2017-18 it has electrified 4,000 plus kms and in 2018-19 Railways has electrified over 5200 kms.
“We aspire for big targets and this year’s targets are even bigger than last year,” he said.
He said while the Railways will move towards complete electrification, there will still be some tracks like in border areas and in narrow gauge where it will continue to use diesel.
“We are also working towards use of bio-diesel instead of diesel on such tracks,” he said.
But, there will still be requirement of diesel for border areas, or narrow gauge line, where “we are making an effort to move from diesel to bio-diesel or environmentally friendly materials”, Goyal said.
Both these moves will be transformational in terms of impact of climate change that Railways contributes, he noted.
He said when he became a minister, 50 per cent trains coming to Delhi also were running on diesel and “we are now working to a plan that every train that comes to Delhi should come through an electric traction in the very near future”.
In his written reply, the minister said, as per the latest Indian Petroleum and Natural Gas statistics published by Ministry of Petroleum and Natural Gas for 2017-18, Indian Railways is the third largest consuming sector of high speed diesel (HSD) after resellers/retailers and road sector. Consumer wise data is not available in this publication.
“Diesel fuel bill for traction has been around 20 per cent of ordinary working expenses in the year 2013-14. It is between 14 to 15 per cent from the year 2015-16 to 2018-19 (provisional figures) and there has been no significant variation in this period. “It is expected to remain in the same zone during 2019 20 as per budgetary estimate,” the minister said. (PTI)