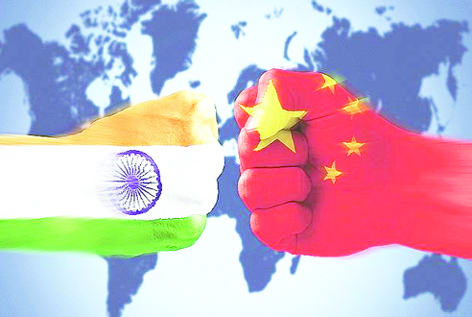 K.N. Pandita
It appears that China has played its pre-planned game on Sino-Indian border in Eastern Ladakh on time. It synchronized with a particular situation developing in Pakistan.
It will be remembered that China’s reaction to the Indian Parliament’s J&K State Reorganization Act 2019 was cryptic but very significant as we look at the hindsight. China had said that converting the Ladakh region into a Union Territory was a matter of concern for her. Commentators remained content with the simplistic explanation that China has never accepted the existing LAC as an international border in Ladakh and has been laying claims to large chunks of territory in Eastern Ladakh. It will also be recollected that in the Sino-Indian conflict of 1962, China grabbed a large chunk of Indian Territory in Aksaichin and did not return it.
China waited just to gauge how much Pakistan could achieve on an international level to mould opinion against India’s reorganization plan in Kashmir. Major powers of the world accepted Indian argument that reorganization was an internal matter. Finding no takers of her lament in the comity of nations, Pakistan did some nuke-rattling allowing some minions in the Council of Ministers to boast of half a kilometre weighing nuclear weapons. India did not budge. In doing so Pakistan volunteered to become the laughing stock for the entire world.
Finally, Pakistan decided to intensify the only option of intensifying cross border firing, shelling and infiltration in Kashmir, making Kashmir Valley jihadists and gangsters pro-active and concentrating on media hype to malign India, as a “Nazi and Fascist regime” pursuing the policy of holocaust of Indian Muslims. Now Imran Khan became an advocate of not Kashmiri but also of nearly 20 crores Indian Muslims. He managed to hook up the non-Semitic Islamic States of Turkey, Malaysia and Iran as supporters of his “Muslim Holocaust” theory. But it cut no ice either with the Western democracies or even with OIC with 53 Islamic States as its members. Hence for several months by now, we have recurring firing and shelling from across the border on some sensitive posts to which Indian forces respond as per necessity. In the meanwhile, during the past four months, Indian security forces liquidated 148 Pakistani infiltrators and Kashmiri armed jihadi insurgents.
Finding that Kashmiri separatist and secessionist leaders like Geelani and Mowlavi Umar failed to provoke large or small scale public protest rallies in Kashmir against the Reorganization Act, the ISI decided to sideline them. Instead, it picked up a younger group of Kashmiri Muslim Jamat-i-Islami activists stationed either in Muzaffarabad or Rawalpindi. As the Modi government had come down with a heavy hand on the hawala transactions – — primary funding channel for the Kashmir militancy — ISI inducted narcotic trafficking and drug pedalling in Kashmir as it had done during the Khalistan movement in Punjab. This starved Geelani and his lust for large funds and no account of expenditure hurt his ego. In utter desperation, he declared his disassociation with Hurriyat (G).
The gradual depletion of fresh recruits for militant cadres, effective implementation of “Operation All Out” of Indian Generals, a substantial reduction in hawala funding, increasing dissatisfaction of locals in the valley with the lawless jihadis and their role in bringing intelligence to the security forces about the hideouts of the militants, all combined to assure China that Pakistan was on the verge of losing its game in Kashmir. In addition to an adequate response to Pakistan’s border shelling and pushing infiltrators into Kashmir, India issued a strict warning to Pakistan to vacate the parts of original J&K State illegally occupied by her.
These are the factors that became a catalyst to China’s sudden aggression in Eastern Ladakh. Somehow, Beijing began to believe that India has drawn up the plan of recapturing its areas under the control of Pakistan. She planned intrusion at a few points but it should be noted that she had bigger plans and different intentions. If India captured Gilgit, the world community will endorse India’s right to retrieve the part of the state under illegal occupation of Pakistan and China. That would jeopardize the entire scheme of Karakorum Highway as well as the CPEC. If that happened China’s boast of world power would sink to its nadir. Hence one can explain the logic behind China’s massive build-up in the Galway region.
But Beijing hardly expected a mighty retaliatory jab by India. When PM Modi thundered that the era of expansionism was over, Beijing found that the entire democratic world stood behind the Indian Prime Minister. President Xi opened his eyes to a completely new strategic scenario in the Asian Continent. He began to realise what it meant to throw a challenge to the entire democratic world particularly India, the largest democracy of the world. The world stood behind the iron man of India who they found adequately qualified to lead the Third World War if unleashed by autocratic, theocratic and pro-military regimes on the globe.
Where do we go from here? The seven decades-old concepts of China that she can ride roughly shod over the borders of her neighbours stand shattered and rent asunder. The democratic world and their militaries have identified the enemy that tries to look at them with an eyeball to eyeball stance. Their policy vis-a-vis the Dragon would be (a) to disable Beijing’s financial and economic hegemony over the world, and (b) to insulate India-Pacific region against Chinese belligerence. It could also mean naval blockade of China. In such a scenario China will be adorned with the so-called Necklace of Pearls. We know that China will desire to live as a peaceful neighbour of India but that will happen only when her wings are clipped and she is denied flight beyond her existing geographical borders.
feedbackexcelsior@gmail.com