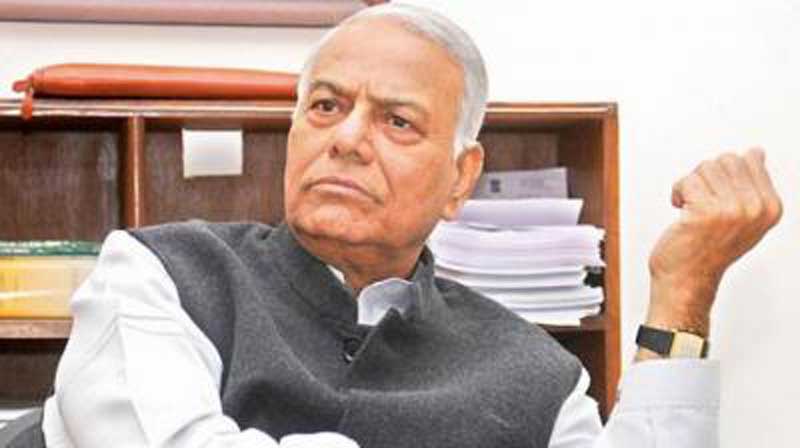 Srinagar, Nov 22: Former Union Finance Minister Yashwant Sinha today ridiculed Centre for its claim about normalcy in Kashmir and asked how things are normal in Kashmir when political leaders including three former Chief Ministers are under detention.
Speaking to reporters after his arrival in Srinagar, Sinha said that things are not normal in Kashmir as is being projected by the Centre. “Internet is shut and political prisoners are under detention, are things normalizing here? How are things normalizing? Political prisoner including three former Chief Ministers are in detention,” he said.

Click here to watch video
When asked was Home Minister Amit Shah’s statement on Kashmir normalcy contradictory, the former Minister said: “I think his statement in the Parliament was not entirely right. He skipped several things in his speech. The picture he tried to present in the Parliament was not entirely right”, he said.
Sinha said that although they have not carried out assessment but saw shops closed on way to hotel from Airport. “We have not carried any assessment yet. We just came from Airport and found all shops, except vegetable shops, shut on our way. It suggests that the chain has been disrupted”, he said.
He said that people have suffered huge losses and their lives have been affected. “People associated with the trade and industries, tourism and transport have suffered huge losses; whole chain has been disrupted”, he said.
Sinha said that people are unable to pay back loans. “I have seen banks seizing the vehicles of transporters who were unable to pay bank loans due to lack of transportation and tourism. Livelihood of several people have been affected and this aspect has not been counted in the normalcy. Whatever we have heard in the Parliament no one talked about this aspect. The economic loss which the people have suffered here would be our priority. We would talk to the people of Chamber and Commerce. Our effort will be to present right picture of Jammu and Kashmir to the rest of the country”, he added.
On investment in Kashmir, Singh said: “First investor’s meet was postponed last month. Let us see what happens in the future, who will attend the meet and whether they will be interested in the investment or not? I think it will be difficult to invest here in the prevailing situation. People would not invest unless everything is normal”, he said.
On his visit to Kashmir, Sinha said: “I tried to visit Valley along with my friends in the month of September as well. I was not permitted and sent back from Srinagar Airport. I am thankful to them that they allowed me to visit this time. We are here till 25th November. Our aim is to meet maximum people including different associations to carry a ground assessment of the situation. Second thing we would like to keenly examine is the economic loss people have suffered after 5th August here. We would try to know the losses suffered by trade, tourism and orchard owners”, he said.
Former Chief Information Commissioner, Wajahat Habibullah, said that suspension of democratic liberties is bad for Jammu and Kashmir and the country. “My concern is the suspension of democratic liberties which I feel is not only bad for the people of Jammu and Kashmir but for my country as well”, he said.
“One thing that I must pride myself on being an Indian is that we are not only world’s largest democracy but afore most one as well. And therefore if democratic rights are denied to a section of citizens, that is a matter of concern. That is why I have come to see myself together with some other group”, Habibullah said.
He demanded that democratic rights should be restored in Jammu and Kashmir. “Situation here is that democratic freedoms have been denied to the people. The democratic freedoms need immediate restorations. The manner it has been manifested is that a State has been denied the Statehood. I would like to see the reaction and aspirations of the people here and project it to the people of the rest of the country so that they can understand what is happening in this part of the land”, he said.
Concerned Group of Citizens (CGC) headed by Sinha and comprising Habibullah, journalists Bharat Bushan and Sushoba Bharve are on four day visit to Kashmir to assess the ground situation.