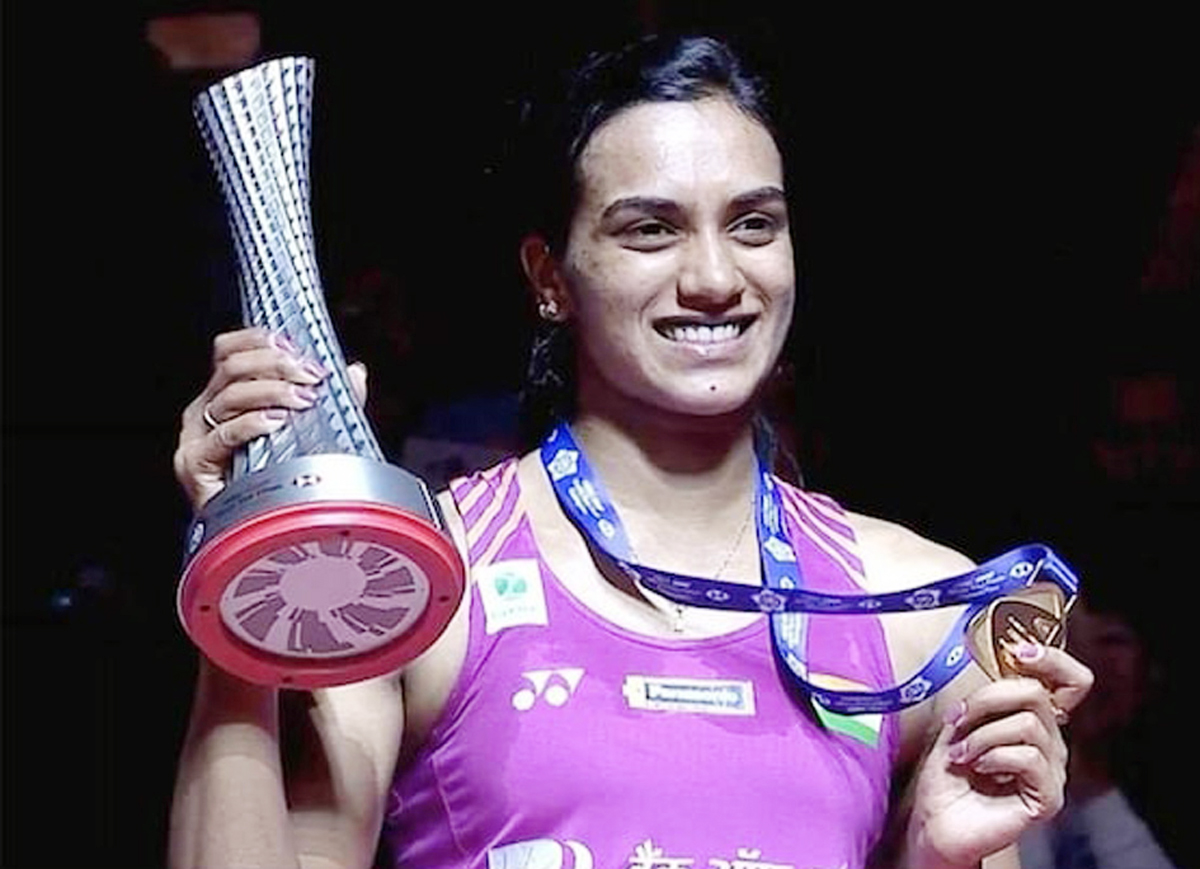 GUANGZHOU, Dec 16:
A relieved P V Sindhu let out a joyous scream when she finally laid her hands on a gold medal by claiming the World Tour Finals with a win over 2017 world champion Nozomi Okuhara here today.
With the straight-game victory, coming after seven straight final losses, Sindhu became the first Indian to achieve the feat.
Playing her third successive season-ending finale, Sindhu, who had lost in the summit clash to another Japanese, Akane Yamaguchi, to settle for a silver in the last edition, prevailed 21-19 21-17 in a match that lasted an hour and two minutes.
This was her career’s 14th title but the year’s first. Prior to this in 2018, she has won silver at the World Championships, Asian Games, Commonwealth Games, Thailand Open and India Open.
Dubbed a bridesmaid after falling short of gold on a number of occasions, Sindhu finally broke her jinx, screamed and sunk to her knees.
Saina Nehwal had reached the finals of 2011 World Super Series Finals, while Jwala Gutta and V Diju finished runners up at the 2009 edition.
Sindhu, an Olympic and World Champi-onship silver medallist, was composed and held her nerves at the crucial moments to stay a step ahead of the Japanese through the match.
In the first game, Okuhara made a couple of errors and Sindhu took early lead.
She used some drop shots and looked good at the net to lead 7-3 but Okuhara narrowed down the deficit to 5-7. Sindhu dominated the next long rally and nosed ahead 11-6 at the mid-game break.
After the breather, Sindhu extended her lead to 14-6 before Okuhara reeled off four successive points to narrow the deficit.
Okuhara seemed to control the proceedings next as she erased the deficit to claw back at 16-16. In fact, the Japanese grabbed 10 of the 12 points after being down 6-14 down, to draw parity.
But Okuhara also smashed wide twice to hand Sindhu a 19-17 advantage. The Indian grabbed three game point advantage but Okuhara managed to save two before Sindhu sealed the opening game with a superb drop shot.
Sindhu engaged in long rallies with Okuhara and managed to stay 6-4 ahead at one stage of the second game. The Japanese stretched and controlled the rallies and waited for the Indian to hit out. It worked as she forced her way back at 7-7.
Sindhu, however, managed to always stay ahead and led 11-9 at the interval after Okuhara lost a video referral.
Okuhara tried to push the shuttle back of the court from the baseline and unleashed a body smash to make it 12-13. She kept snapping at her rival’s heels to make it 16-17.
A return to the net gave Sindhu a 18-16 lead. A long rally ensued and it ended with Okuhara leaving it shot and Sindhu unleashing a smash to move to 19-16.
A lucky net chord took the Indian one step away from the title. Sindhu grabbed three match points and converted them immediately to seal the issue in her favour. (PTI)