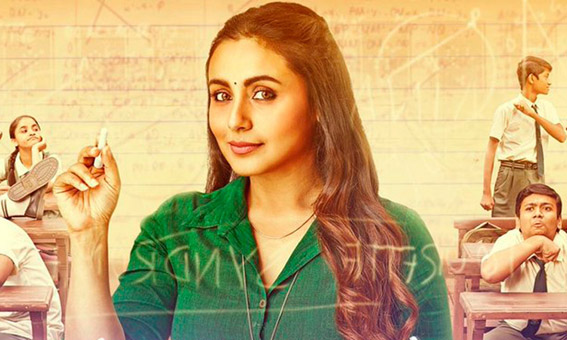 Rani Mukerji is all set to make a smashing comeback after over four years with yet another woman oriented movie: HICHKI produced by Yash Raj Films and directed by Siddharth P. Malhotra. Judging by its trailer, the film gives out positive, feel good vibes as it is the story about a teacher who turns her biggest weakness into her strength. Is the movie as good as it looks? Read on our full review to find out.
The story of the HICHKI revolves around Naina Mathur (Rani Mukerji) and her earnest struggle to break into her dream career of teaching while battling Tourette’s syndrome. After much trepidation and tussle with management and Principal (Shiv Subramanium) of a fancy public school, she lands a job as a teacher. The glitch here is that she is given a class full of mischief makers as students. The challenge comes in form of these unruly kids and of course, her own physical shortcoming. First, it starts with the students resisting her efforts, pulling pranks on her, absolutely frustrating her to the point of breakdown and later it moves on to a great issue: Elitism prevalent in the education sector. Soon it is Naina’s class of unruly kids from a nearby ghetto vs the privileged students of the St Notker’s High School who ‘legitimately belong’ there. This class of 14 students essentially come from underprivileged background and are a part of school, only because of the compulsion by the Right To Education Act on the school management. It is a classic underdog-take-on-the-world and wins kind of situation. What happens when Naina takes up the challenge teaching this class of rejects is what forms the rest of the story.
HICHKI is inspired by the Hollywood flick FRONT OF THE CLASS based on the book by Brad Cohen, Front of the Class: How Tourette Syndrome Made Me the Teacher I Never Had, co-authored by Lisa Wysocky. The premise is old and films like HINDI MEDIUM and TAARE ZAMEEN PAR come to mind when one thinks of HICHKI.
The film works when it comes to the basic storytelling and holds the attention in the first half. While the story is predictable, the screenplay is engaging and keeps you hooked on to its first half. Anckur Chaudhry’s dialogue, story and screenplay starts off on a great note. It is sharp, clever, zingy and funny but slips eventually towards the second half. Director Siddharth Malhotra has co-written the story and screenplay with Chaudhry, Ambar Hadap and Ganesh Pandit. Though their intention was genuine, they try too hard to somehow to drive the message home towards the end.
Director Siddharth P. Malhotra has done an earnest job by creating heart-warming moments between Naina and her students who slowly but surely come around to appreciate their teacher’s efforts. Malhotra takes a simple story but keeps it engaging throughout and that speaks a lot about his talent as a story-teller.
What makes HICHKI a decent watch really is Rani Mukerji’s effervescent performance and the way she shoulders the film throughout with a renewed zest. Rani is likeable and inspiring and you sure empathize with her cause. She is relentless, spirited and totally right into her character. She does not lose her bearing even once and holds your attention with her amazing screen presence. There is a little ‘act’ in her acting and it makes you wish she did more films! The actors playing her students are true to their characters and do a brilliant job in their bearing of the rebellious turned studious kids. Harsh Mayar playing the role of Aatish stands out. Neeraj Kabi as the disapproving teacher is spectacular. Ivan Rodrigues as the Principal is good. Supriya Pilgaonkar, Kunal Shinde, Shivkumar Subramaniam, Asif Basra, Hussain Dalal, Suprio Bose, Jannat Zubair Rahmani are all fantastic.
Editor Shweta Venkat Mathew does a decent job, though the second half could’ve been tighter. Avinash Arun handles the cinematography well as he plays with his lens to highlight small quirks about the key character of the film. His camera work makes the film look good overall. Music by Jasleen Royal is average. However background score by Hitesh Sonik is good and goes with the narrative.
Overall, HICHKI is a simple, meaningful and an inspiring film that stays with you. Rani Mukerji is back in full form and her fans will be immensely impressed. At the box office, the film will mainly appeal to the younger audiences.
Courtesy : http://www.bollywoodhungama.com