E-Paper
Home Heritage-left Silent narratives from the past 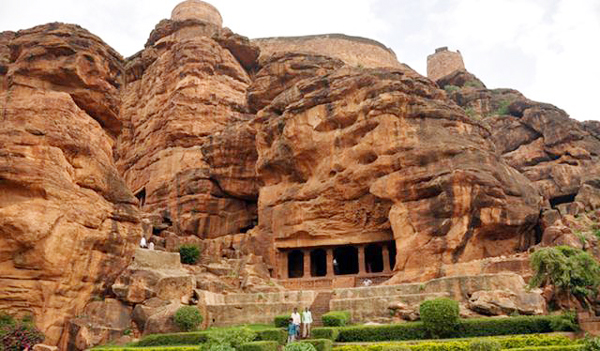 Charvee Sharma
Bearing witness to the rise and fall of several civilisations and dynasties, conquered by the Mauryas and Guptas, absorbed by the vigour of the Mughals, paving way for an era of defiance by the rule of begums, marking a period of sensible statecraft; the Malwa region of India unravels a fresh perspective to primal culture and art.
Tucked away the Bundelkhand plateau region, the capital city of Bhopal sparkles with vivid imprints of a princely legacy speaking through ancient treasures of rock shelters, cave paintings, forts and mosques. Streamlined with aesthetically pleasing modern buildings, bordered by lavish gardens and lakes that dominate the city, Bhopal contains in its manifold many stories that have helped shape our present.
At a little strenuous drive of 45 km from the capital city, anarched gateway that opens to the sprawling caves of Bhimbetka provide a sneak-peak to the history of our distant past, the times when communication did not know the medium of language or written word. Resembling the ruins of an ancient fortress from a distance, the archaeological site of Bhimbetka caves is home to over two hundred rock shelters which contain several paintings depicting the earliest traces of human life.The quartzite rock formations of Bhimbetka have stood through the test of times and the vagaries of nature. With scarce corroboration with historical facts, the place owes its name to the epic of Mahabharata; it is believed that the Pandavaprince, Bhima along with histribe resided in these caves after their exile.
Walking through a painted shelter, one is confronted by distinct drawings, often superimposed over each other, one appears lucid and bright while the other remains largely a faded remnant. Extensive study of this site has demonstrated that the paintings portray several phases. From features depicting the life of primitive man where hunting and gathering remain key activities to pastoral lives with domesticated animals like buffalo, finally culminating to human figures, armies of soldiers equipped with spears and swords along with various religious symbols and figurines. Bhimbetka caves have significantly contribute in the depiction of history from the peripatetic ways of the early man to the beginning of agricultural settlements paving way for transitional advancements towards the flourishing and cultured civilization that we represent today.
Exploring the paintings which span the whole spectrum of time, sketching the journey of human life from the Stone Age and beyond into the period of documented history, can be an awe intriguing experience. The fact that paintings represent a continuum of time showcasing a varied progression of people who inhabited this region, is a remarkable feature for historians and archaeologists. The craggy cliffs opening up to the smooth curves amidst a myriad of hues and textures inside the rock shelters, offers an interesting insight to the study of earth’s history at this region.
Rock art forms an extremely crucial historic and scientific record of human occupation for any particular area. The UNESCO World Heritage site designation for Bhimbetka might not have been able to give leverage for attracting mainstream tourists and backpackers to Bhopal, but these rock caves have found an interesting connect to the archaeological site of Kakadu National Park, Australia.
For people of Aboriginal race, art has always been a distinctly important part of life, seen as an expression of identity to their culture and land. Bhimbetka, bearing a striking resemblance to the Bushmen caves of Kalahari Desert which have survived as a legacy of San people, the original inhabitants of South Africa,also speaks volumes of the rich heritage that lives in the stunning galleries of rock art.
A creation of the early man, the detailed panoramic depictions of Bhimbetka caves have proven to be a treasure for archaeological sciences by enabling our contemporary world to discern traces from prehistoric times. It is crucial to acknowledge that these caves were developed much before the first civilizations known to history, evolved and flourished.Deciphering the pictographs of Bhimbetka gives a careful inference to the kind of lives lived by our ancestors – their cognitive skills and creative abilities. When seen in full perspective, Bhimbetka caves constitute adocumented repository of knowledge of the prehistoric era – its predicaments and steady evolution.