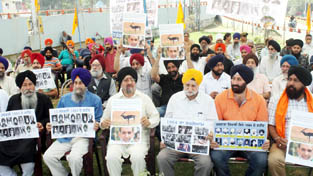 JAMMU, Apr 7: Various Sikh bodies today held protest demonstration against the Government for not taking action against the accused involved in the killing of Sikh community members during anti-Sikh riots in Jammu region.
A large number of people from Sikh community under the banner of District Gurdwara Parbandhak Committee (DGPC), Jammu assembled at Bikram Chowk near Tawi bridge and started protest dharna. Several prominent Sikh community members and those from DGPC Jammu participated in the protest programme.
Click here to watch video
Avtar Singh Khalsa, general secretary DGPC Jammu said that the protest was against Government for letting all the accused involved in the killing of Sikhs during anti-Sikh riots to go scot free. He said actor Salman Khan was sent to jail for killing a deer, but no action has been taken by Government against people involved in the killing of Sikhs during riots.
The protesters were also carrying old newspapers depicting photographs of the deceased killed during anti-Sikh riots. Several community leaders including TS Wazir addressed the gathering and criticized the respective Governments for taking no action against the accused involved in the killing of Sikhs. They pointed out that while famed actor Salman Khan who killed black deer while hunting in Rajasthan, was given jail term of five years, those who killed many innocent Sikh community members in Jammu, Reasi and other areas have been left unpunished.
They demanded that Government must take action under law of the land against the killers of Sikh community members. They also warned massive agitation if the Government failed to initiate action in this regard.