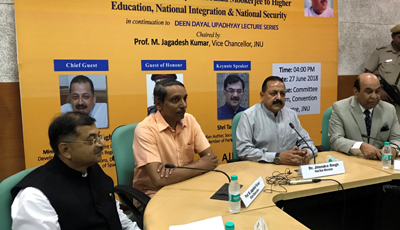 Excelsior Correspondent
NEW DELHI, June 27: Introducing a new narrative to the profile of Bharatiya Jan Sangh founder, Dr Shyama Prasad Mookerjee, Union Minister of State (Independent Charge) of the Ministry of Development of North Eastern Region (DoNER), MoS PMO, Personnel, Public Grievances & Pensions, Atomic Energy and Space, Dr Jitendra Singh, said here today that Mookerjee was an under-rated academician and while the history failed to do justice to him by not adequately acknowledging his self-effacing contribution in public life, a greater injustice was meted out to him by not adequately acknowledging his sterling role as an academician which was recognised even by the British rulers.
Addressing a seminar, as the main speaker, on the subject “Dr Shyama Prasad Mookerjee and his contributions to Higher Education, National Integration and Security” at Jawaharlal Nehru University (JNU), here today, Dr Jitendra Singh described Shyama Prasad Mookerjee as a ‘prodigal child’ who grew up into a ‘versatile genius’, which enabled him to achieve so much in life in a short span of just 52 or 53 years of age. At a time when there were very few Universities in India, which were mostly controlled by the British and dominated by the British faculty, he said, Shyama Prasad Mookerjee rose to become the Vice-Chancellor of Calcutta University at the age of 34 and in spite of his multifarious activities, Mookerjee delivered as many as over 22 Convocation addresses in different universities of India and some of the thoughts expressed in his convocation addresses are timeless quotable quotes with a universal relevance.
Dr Jitendra Singh described Shyama Prasad Mookerjee as an under-rated youth icon of his times, an under-rated academician of 20th century India and an under-rated statesman of post-independent India.
Lashing out at Congress Party and some of the left-leaning intellectuals for dubbing Mookerjee as a “Hindu protagonist”, Dr Jitendra Singh quoted from his Agra University Convocation address of November 23, 1940 to explain what Hinduism meant to Mookerjee in the context of India when he had said, “I would ask you to fulfill in abundant measure your obligation for the revival of the glory of Hindu culture and civilization, not from a narrow bigoted point of view, but for strengthening the very root of nationalism in this country.”
Describing Mookerjee as a perfect blend of conviction and courage of conviction, Dr Jitendra Singh recalled that Mookerjee resigned from the post of Vice-Chancellor when he got involved in agitation against the British Government and resigned from the Union Cabinet because of his ideological differences with the then Prime Minister Jawaharlal Nehru.
Lt. Gen. (Retd.) Syed Ata Hasnain, and Vice-Chancellor JNU Dr (Prof.) M. Jagadesh Kumar also spoke on the occasion. Tarun Vijay renowned scholar, journalist and former MP, delivered the introductory address.