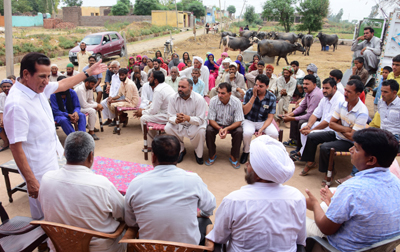 Excelsior Correspondent
JAMMU, June 27: Former minister and senior Congress leader, R S Chib today alleged that statement of  BJP national president Amit Shah recently in Jammu was just BJP’s confession of its failures.
Addressing public meeting at Kalali -Tibba (Kadial) in Suchetgarh border today,  Chib said   that the statement of BJP president, Amit Shah is nothing but a confession of his failures, in which the BJP failed miserably in providing a good governance and its functioning was far from meeting the aspirations of the people of the Sate in general and the people of Jammu  and Ladakh in particular.  Chib said it is ridiculous that it took four years to know that the Jammu province and Ladakh region had been discriminated by the erstwhile BJP-PDP Coalition Government. Especially, it is a joke that Shah has come to know about the discrimination, after pulling out of the alliance.
Chib, while elaborating about the problems faced by the resident of border areas,  said that zero attention has been paid to addresses  them by PDP-BJP alliance. He further said that the BJP inspite of receiving a heavy mandate, played fraud with the border residents. He said the BADP has almost been buried and all the works which were in progress have been stopped. The funds received under various Centrally Sponsored Schemes have been manipulated by BJP workers.
Congress leader expressed his shock and anguish, over the non-payment of compensation to the 45 Gujjar families, who lost everything when the Kalali Tibba,  Gujjar Basti was gutted in heavy fire from Pakistan, about a month back, in which they lost everything including about 60 buffaloes. Chib demanded an immediate payment of compensation, temporary shelter for 45 families, arrangement of adequate fodder for their cattle.
Prominent among others who attended the meeting included, Ch Mahinder Singh,  president BCC Suchetgarh, Arjun Singh, Kehar Singh, Tarsem Singh, Kasturi Singh Chib, Ch Shah Mohd, Mohd  Shafi, Nek Mohd, Ali Hussain and others.