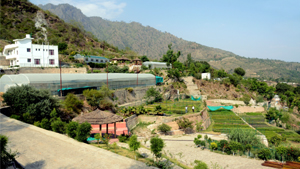 KATRA, June 14: Consequent to the recent incidents of forest fires in the shrine area, Governor N. N. Vohra, Chairman of Shri Mata Vaishno Devi Shrine Board, held a meeting to review all related issues, involving Umang Narula, CEO, and M. K. Kumar, Additional CEO, who looks after all forestry related matters.
Chairman was informed that in addition to the large scale afforestation being undertaken every year under the Greening Action Plan, the Board’s Forest Wing is also enforcing varied measures to effectively prevent forest fires, as per scientifically approved practices which include creation of fire lines, removal of pine needles, dry grasses and weeds from the high value and residential areas and ensuring strict vigil on the ground during the potential forest fire season by deploying a sufficient number of fire watchers in the sensitive sectors. These measures have resulted in promptly controlling as well as minimising incidents of forest fires.
M. K. Kumar, Additional CEO in charge of the forest wing, reported that a short and long term plan for effective fire fighting measures is being implemented. Besides undertaking Fire Audit of the track and the shrine area from time to time, as directed by Chairman, mock drills are conducted and SOPs are implemented for disaster preparedness. In case of any forest fire incident, particularly during the prolonged dry spell coupled with gusty winds, real time management measures are taken.
As a long-term measure, Chairman of the Shrine Board has approved putting in place a dedicated fire hydrant from Bhawan to Adhkuwari via Himkoti Marg. There is also a proposal to extend the Fire Hydrant system along the Tarakote Marg to be used in case of any fire incident.
These efforts have significantly brought down the number of forest fire incidents which take place year after year. 20 fire incidents took place in 2008; 43 in 2009; 3 in 2010; 2 in 2011; 6 in 2012; 7 in 2013 and 12 in 2014. However, no fire incident took place in 2015, while 8 fire incidents took place in 2016, 4 in 2017 and 5 in 2018.
Meanwhile, to conserve the environment and carry out the greening of Trikuta Hills and the spaces along the tracks leading to the shrine, the Board is bringing another 50 hectares area under green cover by planting 80,000 saplings of various species of forest trees besides 61,000 ornamental plants under its Annual Greening Plan 2018-19. In addition, 50,000 soil binders and as many seasonal flowering seedlings will also be planted during the period.
To ensure protection against forest fires, 16.24 km fire lines have already been created in the fire prone areas of the Board this year so far. Besides, 62 Forest Watchers and 14 Village Defence Committee members have been deployed.
The hi-tech Nursery established by the Shrine Board at Kunia, Panthal will produce 2.51 lakh quality plants of varied species to meet the requirement of Annual Greening Plan 2018-19. Work on Nursery Phase-II, covering an area of 0.75 hectares at an estimated cost of Rs. 70 lakh, is also progressing and is expected to be completed by December this year. Till date, Bio-fencing using wild rose and Euphorbia species has been completed on a stretch of more than 11 km. During the past 10 years 13.46 lakh plants have been planted by the Board as part of Greening of Trikuta Hills.