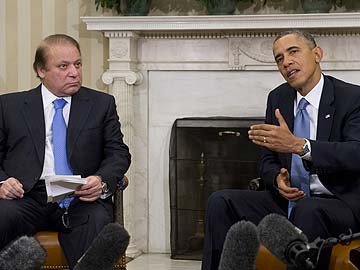 WASHINGTON, Nov 1:  Pakistani Prime Minister Nawaz Sharif gave “no assurance” to US President Barack Obama when he was virtually grilled by his host for not taking action against the 26/11 mastermind Hafeez Saeed.

After his meeting with Obama at the White House on October 23 and before he flew out of the Andrews Air Force Base, Sharif is understood to have told his close aides that he “stood his ground” and “did not budge under pressure” on the issue of Saeed, sources said.

Another source, familiar with Sharif’s meetings, said the Obama administration is aware of the difficulties the new Prime Minister is facing with regard to taking strong action against terrorists like Saeed given their close proximity with the military establishment.

While Obama himself is determined to bring justice to the 26/11 perpetrators, given that six of those killed were American nationals, Sharif is believed to have received the “benefit of doubt”, a third source told.

Obama failed to yield any “assurances” from the Pakistani Prime Minister, despite the President taking it very strongly with him, the source added.

Sharif, sources said, is believed to have referred to the fragile nature of his government, in particular his relationship with the military.

According to source, Sharif “did not give assurance” to the US on the issue of Saeed because of the nature of support and relationship with the fundamentalist outfits in Punjab including those related to Saeed, the head of Jamaat-ud Dawah.

Saeed is believed to be the mastermind of the 26/11 attack carried out by Pakistan-based terror outfit Lashkar-e-Taiba. He is on America’s list of most wanted terrorists but roams freely in Pakistan.

The United States, sources said, is closely monitoring the developments in Pakistan in particular those related to Saeed’s movement and that of terrorist outfits like LeT and Jamaaat-ud-Dawa. (PTI)