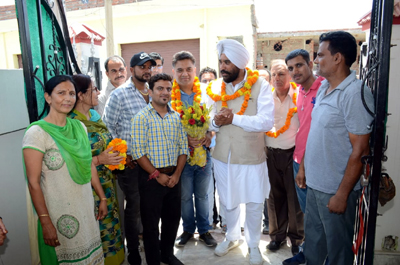 Excelsior Correspondent
JAMMU, June 21: A new tutorial under the name and style ‘Shakti Tutorials’ was thrown open for the students from Nursery to 12th standard at Malhotra Mohalla in Bantalab, today.
The tutorial was inaugurated by Surinder Singh Shingari and Gagan Pratap Singh who also addressed the gathering. Sushil Kumar is the proprietor of the institute.
Surinder Singh Shingari, while speaking to the instructors, emphasized on the role played by the teachers in nation building. He added that a nation is built by its citizens and the citizens are moulded by the teachers. He said that in the development of a country, great attention has to be paid to education and learning, as well as good morals, and nobody was more suited to assist in this process than a qualified and efficient teacher.
Gagan Pratap Singh, while interacting with the students, said that they constituted the backbone of a nation as well as the pillar on which the national edifice was built. He said that the students could play a significant role in promoting nationalism, patriotism, peace and harmony in the society. He wished good luck to the students and hoped that they would surely bring laurels to the tutorial, teachers and parents in the days to come.