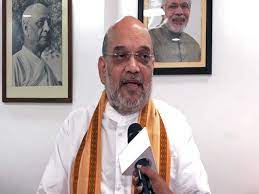 NEW DELHI, Aug 12: Home and Cooperation Minister Amit Shah on Friday said there is a need to establish more than 2 lakh new primary agriculture credit societies (PACS) across the country to achieve the target of providing agri-finance worth Rs 10 lakh crore through cooperatives.
He was addressing a national conference on rural cooperative banks organised by Ministry of Cooperation and the National Federation of State Cooperative Banks (NAFSCOB).
Shah said there are more than 95,000 PACS currently, of which only about 63,000 PACS are functional.
He noted that PACS are the soul of agriculture credit system and therefore it is necessary to strengthen the existing PACS and also expand them.
Shah said there are 3 lakh panchayats in India while the numbers of PACS are only about 95,000. Therefore, he said there is a need to set up more than 2 lakh new PACS.
He asked senior officials of State Cooperative Banks (SCBs) and District Central Cooperative Banks (DCCBs) to set a five-year goal in this regard.
Shah pointed out that agriculture finance through cooperatives have been declining. The 63,000 functional PACS are doing agriculture finance of Rs 2 lakh crore.
If the number of PACS reach 3 lakh, then distribution of Rs 10 lakh crore agriculture finance could be possible through cooperatives, he asserted.
The minister highlighted that the Cabinet Committee on Economic Affairs has approved computerisation of PACS to improve their efficiency and to bring transparency and accountability in their operations.
This project proposes computerisation of about 63,000 functional PACS over a period of 5 years with a total budget outlay of Rs 2,516 crore with the Centre’s share of Rs 1,528 crore.
“Computerisation is a medicine for 100 diseases,” Shah said, adding that this will help in upgradation of their human resources and accounting system.
The minister also asked PACS to increase their outreach and bring more farmers in their fold.
Shah said the ministry has floated a draft ‘Model By-laws of PACS’ on which it has invited suggestions from state governments and other stakeholders.
He said suggestions have come and the government will soon finalise the model by-laws, which proposes to allow PACS to undertake various activities like dealership of petroleum products and running PDS shops.
The minister stressed on making PACS viable and said the by-laws propose to allow them to undertake 22 new activities.
PACS constitute the lowest tier of the three-tier short-term cooperative credit (STCC) in the country comprising about 13 crore farmers as its members, which is crucial for the development of the rural economy.
Besides model by-laws for PACs, Shah said the government is working on a new cooperation policy, setting up a university as well as an export house and developing a database of cooperatives.
Shah also presented performance awards to select SCBS/ DCCBs/PACS, and felicitated a few short-term cooperative credit institutions for 100 years of service.
At the event, Union Minister of State for Cooperation B L Verma, Cooperation Secretary Gyanesh Kumar, NAFSCOB Chairman Konduru Ravinder Rao, NAFSCOB’s MD Bhima Subrahmanyam, NCUI President Dileep Sanghani, Kribhco Chairman Chandra Pal Singh Yadav and NAFED Chairman Bijender Singh were present.
As per an official statement, the short-term cooperative credit structure in India comprises 34 SCBs, 351 DCCBs and 96,575 PACS.
NAFSCOB was established on May 19, 1964 with the broad objective of facilitating the operations of State and Central Cooperative Banks and development of short-term cooperative credit structure.
NAFSCOB provides a common forum to its members and their affiliates/ shareholders/ owners to project their achievements, focus their concerns and promote their interests. (PTI)