KATHUA, July 19: Deputy Commissioner Kathua, Rahul Pandey today reviewed the progress of works under different schemes of PWD (R&B), GREF, PMGSY and Forest departments here at a meeting held in the Conference Hall of DC office Complex.
During the meeting, the DC reviewed the progress of works taken up under different schemes and directed the concerned to expedite the completion of pending projects within set timelines.
Reviewing the PMGSY sector, the DC directed the officers to closely pursue the Forest clearance for the road projects proposed in different parts of the district.
The DC also called for checking the project feasibility before starting the work to avoid hindrances later in the project execution. He directed the XENs to pace up the speed to complete all works in a time bound manner. He also called for removing bottlenecks to achieve maximum target works within stipulated time.
The concerned officers were asked to release money in favour of the executing agencies tasked with the utility shifting and also laid thrust on ensuring early tendering and allotment of all identified works.
Regarding the delay in execution of different works, the DC called upon the concerned officers to serve show cause notice to the contractors for the delay.
The DC further called upon the officers to execute all works under different schemes in a transparent and time bound manner.
Taking serious view of the slow progress on some projects, the DC called upon the executing agencies to blacklist the contractors for not conforming to the timelines and leaving the work midway.
The meeting was attended by CPO, DFO, Engineers of PWD Kathua Division, Basohli, CEO, XEN PMGSY Div Billawar, Kathua and other district officers. 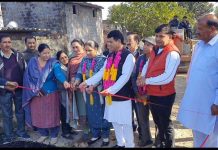