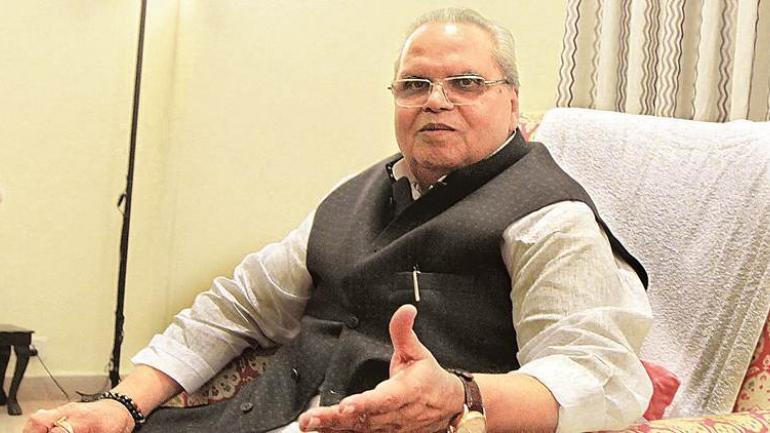 Sanjeev Pargal
JAMMU, Feb 24: Governor Satya Pal Malik said today that some security related action is being taken by security forces but this was purely linked to Pulwama attack, which was unprecedented one and dispelled rumours being spread in the Valley saying induction of 100 companies of para-military forces was related to conduct of general elections and counter militants’ planning to disturb the country and its democratic process.
“There is some security related action being taken by the forces, but this is purely related to the Pulwama attack which is unprecedented one. Response of security forces is guided solely by the need to counter both impact and any further action that may be taken by terrorist groups, who are still out to disturb our country and its democratic process,” Malik said in a statement issued after an informal meeting of the State Administrative Council (SAC).
Stressing that induction of security forces should be seen only in the context of conducting elections and not attributed to any other cause, he appealed to the people not to believe in rumours of any extreme nature which are/were circulating widely in some quarters and maintain calm.
These rumours, he said, are unnecessarily creating an atmosphere of fear in the minds of people, leading to stress and disruption of normal life. Rumours about curfews and other actions shouldn’t be believed, he added.
“A much larger number of additional police forces are needed for conducting general elections. Normally, forces are inducted a month before elections so that they settle down and familiarize with the ground situation. It is in this context that 100 companies of Central Forces are being inducted into the State at the moment. This is less than the actual additional forces required and more would be inducted in the coming weeks,” the Governor said.
In this regard, Malik recalled that over 400 additional companies of Central Police Forces were provided to conduct Urban Local Bodies and Panchayat elections, which were spread over 13 phases (in the months of October, November and December last year). It was because of presence of the para-military forces, the elections were conducted peacefully, he said.
The Governor pointed out that there were many attempts during Panchayat and Municipal elections to frighten people from participating in the political process.
“Death threats were given by the terrorist organizations to anyone planning to contest the election. Candidates were asked to go with their coffins to file the nominations and that they should be prepared for their dead bodies to leave polling booths. Voters were also threatened with severe consequences if they came to vote,” he recalled.
After the Pulwama incident, he said, the security concerns pertaining to the elections are much higher with the possibility of terrorist organizations increasing their activities against candidates and voters on a much larger scale and, therefore, much larger number of additional forces are needed to conduct general elections, which are scheduled to be held in the months of April-May.
The statement from the Governor came after the State administration issued many orders including supplying ration at the earliest, cancelling leave of doctors and policemen, leading to panic and tensions among the inhabitants of Kashmir. The widespread arrests of Jamaat-e-Islami cadres and separatists contributed to these rumours.
Malik also addressed the issue of safety and security of Kashmiris residing outside the State. He said Prime Minister Narendra Modi has given clear directions to the country yesterday that there is no fight against Kashmiris but that it is a fight for Kashmir.
“This is a clear signal that the people of Jammu and Kashmir are not only integral part of India but it is the responsibility of the country to take care of their safety wherever they may be”, he said.
“Over 22,000 Kashmiri students are studying outside the state and the number of students who have actually been injured or hurt in incidents is not even in single digits….the exaggerated reporting has led to unnecessary excessive reactions in the Kashmir valley,” Malik said. He said it was necessary for everyone to avoid fear-mongering and not to worsen matters.
“The State’s system of Liaison Officers in nine major cities has worked effectively so that there is no panic anywhere and students continued their studies safely. The work of Liaison Officers, helpline in State and other measures have ensured that the vast majority of students continue their studies uninterrupted. Media has played up a few scattered incidents more than what has actually happened, which has been a major cause of fear and anxiety among parents, whose children are studying outside the State. The exaggerated reporting has led to unnecessary excessive reactions in the Kashmir valley. It is necessary for everyone to avoid fear mongering and not to worsen matters,” Malik said.
He also re-assured all Government employees and their families, who stay in Jammu that their safety and security was of primary importance. He appealed to the people of the State to stay calm and don’t believe in rumours floating around in any form of media. The Government is concerned about people’s welfare and will ensure that they are safe and can carry out their normal activities, he added.