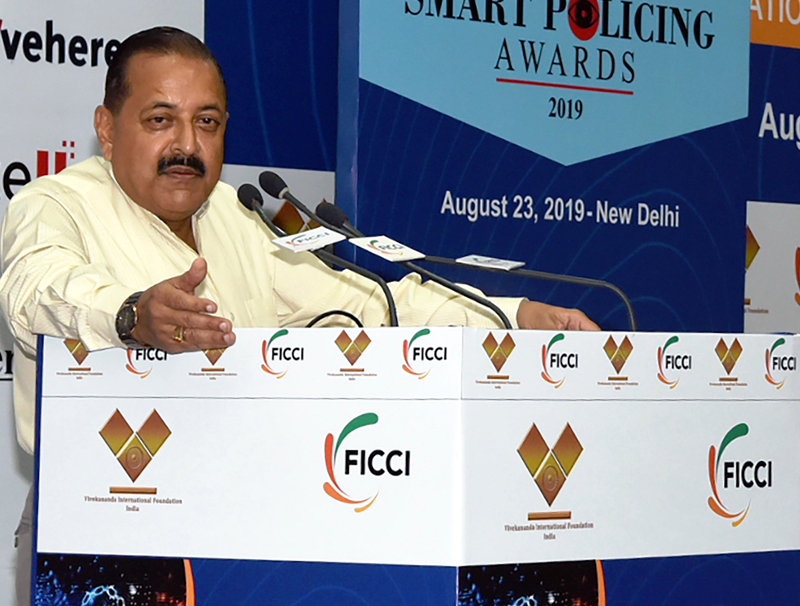 Excelsior Correspondent
NEW DELHI, Aug 23: The human rights of security forces are far more important than that of terrorists and in case of doubt, benefit should go in the favour of security personnel, Union Minister Dr Jitendra Singh said today.
Speaking at the ‘FICCI Smart Policing Awards 2019’ on the second day of ‘Homeland Security 2019’ conference organised by FICCI and Vivekananda International Foundation, Singh, Minister of State in the Prime Minister’s Office, said the nation is eternally indebted to its security forces.
“The human rights of a security person is much more paramount as compared to that of a criminal or a miscreant or a terrorist,” he said to a thunderous applause by police personnel at the event from across the country.
“A nation which does not have the conscience to respect the sacrifices of its security persons is doomed to meet its imminent end by getting consumed by the same forces which it tends to appease,” he said after distributing awards to the police personnel.
Dr Singh said the nation and the society as a whole are gradually getting conditioned to look at things in the eye instead of getting confused by duplicities.
The Modi Government is committed to stand by the security forces and make policing more effective, be it for laws relating to women or drug trafficking, he added.
G K Pillai, Adviser, FICCI Committee on Homeland Security, and former Union Home Secretary, said there is a relative breakdown of the criminal justice system and cases take far too long, both during investigation as well as in the courts.
“Two initiatives that need more focus are upgrading the training quality of the State Police forces as technology and crime situation are rapidly changing, and improving the basic governance, including monitoring of cases right from the time an FIR is registered to the time it is taken to the court to get a conviction,” he said.
Harjinder Kaur Talwar, President, FICCI FLO, said citizens too have an equal role to play and there has to be a collaborative effort for smart policing.
The Union Minister handed over a total of 35 awards to various units of police forces of different states under categories such as anti-insurgency, child safety, community policing, cyber crime management, emergency response and human trafficking.
While the ‘Special Jury – Smart Innovative Policing Award’ was won by Maharashtra State Police, the individual ‘Special Jury – Smart Police Officer Award’ was bagged by Swapna Gore, Deputy Commissioner of Police, Pune.
A FICCI compendium on Best Practices in SMART Policing 2019 from across all States was released at the event.