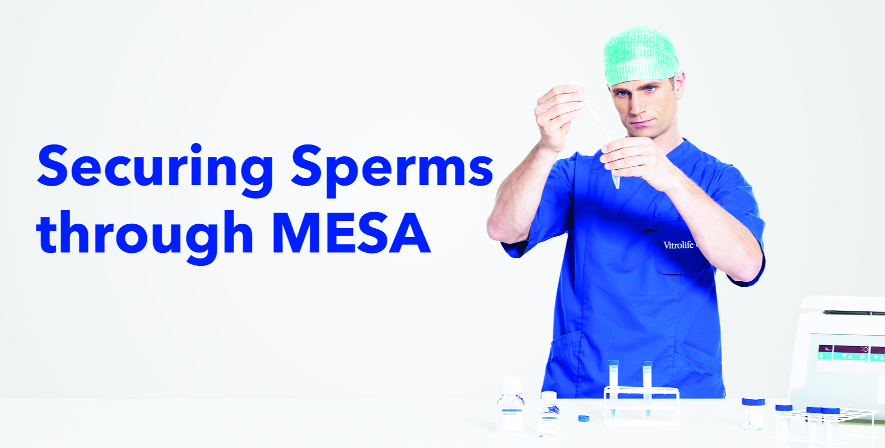 Dr.Kanchi Khurana
MESA (Microsurgical Epididymal Sperm Aspiration) is a surgical sperm extraction technique performed in men with vasal or epididymal obstructions, to retrieve sperm-containing fluid from epididymis. This technique, applied with ICSI (Intra-Cytoplasmic Sperm Injection), has proven to be of immense advantage in cases of obstructive azoospermia, where sperms are produced in adequate numbers but are blocked from traveling from the testicle to the ejaculate. This procedure is also done when the vas deferens is blocked, severed or missing.
The procedure is carried out in an operating room. It uses an operating microscope to locate the tubules of the epididymis in a precise way so that a large number of sperm can be extracted. It is performed under general, spinal or local anaesthesia. Doctor uses fine cannula to remove the motile sperms from the epididymides.
An incision is made in the scrotal skin to expose the testis and epididymis. Using high -power optical magnification provided by an operating microscope, the epididymal tubules are identified and opened and sperms extracted.
The sperms harvested from epididymis are generally considered of better quality than those harvested directly from the testicles because they have had more time to mature. The harvested sperm can be used immediately or frozen for use at a later time. In case no sperm is found, then it is necessary to go for next procedure called TESE or testicular sperm extraction to look inside the testicle for viable sperm.
Sperms retrieved through MESA are immediately prepared and examined in the laboratory. If the sperm are found after examination, they are initially frozen in liquid nitrogen (cryopreservation). The amount of sperm collected through MESA is usually low and not capable of independent fertilization. Thus, the partner’s eggs are always fertilized using ICSI.
ICSI is a form of micro-assisted fertilization. Without ICSI, IVF involves mixing thousands of motile sperms with each egg in a dish. Its called insemination of eggs. It is expected that sperms and eggs would interact through biochemistry; but in cases where either egg or sperm factors are deficient, then very few of the eggs become fertilized after overnight incubation with sperms.
ICSI is an effective procedure for couples with sperm problems. It involves:
* Selecting a sperm
* Picking it up with a specialized micro-needle
* Injecting it into the middle of the egg
How to obtain sperm for ICSI
ICSI involves use of sperms obtained from the ejaculation. When there is no adequate sperm available, MESA can be utilized.
MESA combined with ICSI has an excellent potential for men who have had a vasectomy and do not wish to undergo surgical reversal, or had a failed surgical reversal. The success rates per cycle exceed those for a vasectomy reversal.
(The author is Gynaecologists IVF Specialist Indira IVF Hospital)