E-Paper
Home Todays story S Kashmir, SMC to have polling in all 4 phases 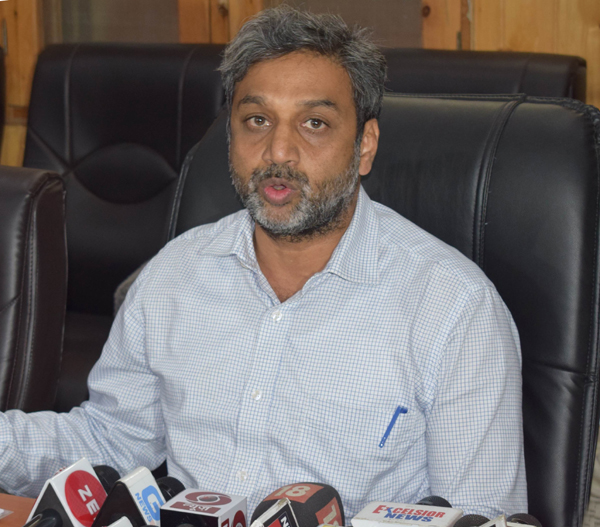 Elections to be over in Jammu in 3 phases, Ladakh one phase
Polling between October 8-16, counting on Oct 20

Sanjeev Pargal/ Fayaz Bukhari
JAMMU/SRINAGAR, Sept 15: The State Election Commission has walked a tightrope in finalizing four-phase election schedule for the Urban Local Bodies by splitting militancy-infested South Kashmir and Srinagar Municipal Corporation (SMC) in all four phases but finishing off Jammu region in just three phases and Ladakh in only one phase.
Click here to watch video
Chief Electoral Officer (CEO) Shaleen Kabra announced the election schedule today at a press conference in Srinagar. The elections will be held on October 8, 10, 13 and 16. Counting will be held on October 20. Entire poll process will be over by October 27.
In Phase-I on October 8, Srinagar Municipal Corporation Ward No. 16 to 17 and 74, Municipal Committees of Kupwara, Handwara, Bandipora, Budgam, Chadoora, Khansahib, Kulgam, Devsar, Achhabal, Kokernag and Qazigund and Municipal Council Baramulla in Kashmir, Municipal Committees of Leh and Kargil in Ladakh region, entire Jammu Municipal Corporation, Municipal Council Poonch and Municipal Committees of Bishnah, Arnia, RS Pura, Ghou Manhasan, Akhnoor, Jourian, Khour, Rajouri, Thanna Mandi, Nowshera, Sunderbani, Kalakote and Surankote will go to the polls. In the first phase, polling will be over in entire Ladakh region and three district of Jammu, Rajouri and Poonch.
Phase-II on October 10 will see polling in Srinagar Municipal Corporation Wards from 18 to 37, Municipal Council Anantnag and Municipal Committees of Langate, Sumbal, Kunzar, Watergam, Charar-i-Sharief, Beerwah, Magam, Yaripora, Frisal and Bijbehara in Kashmir and Municipal Councils of Udhampur and Kathua and Municipal Committees of Kishtwar, Doda, Bhaderwah, Thathri, Ramban, Banihal, Batote, Ramnagar, Chenani, Reasi, Katra, Hiranagar, Nagri Parole, Lakhanpur, Billawar and Basohli.
In second phase, polling will be completed in six districts of Jammu region including Doda, Ramban, Kishtwar, Udhampur, Reasi and Kathua.
In Phase-III, Srinagar Municipal Corporation Ward Nos. from 6 to 15 and 38 to 53, Municipal Council Sopore and Municipal Committees of Hajin, Uri, Tral, Awantipora, Mattan, Pahalgam, Ashmuqam and Seer Hamdan in Kashmir Valley and Municipal Committees of Samba, Ramgarh, Vijaypur and Bari Barahamana in Samba district of Jammu region will go to polls.
In the third phase, polling will be over in Jammu region.
In the fourth phase, Srinagar Municipal Corporation Ward Nos. from 1 to 5 and 54 to 73 and Municipal Committees of Pattan, Ganderbal, Pampore, Khrew, Pulwama, Shopian and Dooru Verinag, all in the Kashmir Valley would have voting.
Official sources told the Excelsior that voting in South Kashmir and Srinagar Municipal Corporation has been spread to all four phases taking in view the security considerations.
The Government has taken bold decision of holding elections to the Municipalities on party basis notwithstanding the boycott (of the polls) by two premier parties—the National Conference and the People’s Democratic Party (PDP).
“The Model Code of Conduct will come into force with immediate effect and it will apply on all Municipal bodies going to polls as also the candidates, the political parties and the Government,’’ Kabra said.
Kabra said dates for the Panchayat Polls, scheduled for November, will be announced on Sunday.
The Municipal Polls in Jammu and Kashmir are set to be held in the State after 13 years.
The notification for first, second, third and fourth phases will be issued on September 18, September 20, September 22 and September 24 respectively.
The last date for making nominations for first, second, third and fourth phases are September 25, September 27, September 29 and October 1 respectively.
The last date of scrutiny for first, second, third and fourth phases are September 26, September 28, October 1 and October 3 respectively.
The last date of withdrawal for first, second, third and fourth phases are September 28, October 1, October 3 and October 5 respectively.
“In the past two months, we have revised electoral rolls and the final list has been published,” the CEO said. “322 of the 1,145 wards have been reserved for women, while 90 reserved for Scheduled Caste candidates and 30 reserved for Scheduled Tribes.”
He said 17 lakh voters will elect representatives to 79 Municipal bodies in the State including the Jammu and Srinagar Municipal Corporations.
With regard to security, a major concern raised in the run-up to the polls, Kabra said: “We are duty bound and we are going to provide an atmosphere for conduct of free and fair elections, including adequate security.”
The CEO said that atmosphere for free and fair elections adequate security would be provided. “This is a notification calling the people to elect the representatives to the Local Bodies and it is expected that people will come forward. We are duty bound and we are going to provide atmosphere for free and fair elections including adequate security”, he said.
Kabra, when asked about the boycott of the polls by two main Kashmir based parties, said: “The Municipal elections have been last held in 2005 and we all realized that these are Local Bodies elections, they concern directly the developmental needs of the local areas. This office has taken measures of holding free and fair election only after specifically being asked by the Housing and Urban Development Department and we are making sure that these elections are held in that particular manner. The decision of parties not participating is a matter which pertains to them. The Municipal bodies elections does not bar or debar anybody from participating. There are parties who can participate and in addition there are people who can participate as independents. So, the process involves that anybody can stand and be a representative of their wards”, he said.
Kabra said that the migrants can vote in these elections as they are the residents of the place where from they have migrated. “The migrants are treated as ordinarily resident in the place from where they have migrated. That is the basis that they vote in Assembly polls as well as the parliamentary polls in the respective constituencies, irrespective of where they have migrated. There cannot be two principles and since the Municipal rolls and the Panchayat rolls are derived from this very Assembly or the Parliamentary roll, therefore they have voting right because they are relatable. Therefore their voting right continues to be in Kashmir”, he said.
Municipal polls will be conducted on party lines. However, the major regional parties of J&K – the People’s Democratic Party (PDP) and the National Conference (NC) – have already announced their decision not to participate in these polls. Both parties had stated that the Centre should clarify its stand on Article 35A, the validity of which has been challenged in the Supreme Court. In August, Centre had sought a delay in the date of hearing in the case from the Apex Court citing the conduct of Municipal and Panchayat elections in the State.
Meanwhile, for the first time, EVMs are being used in Municipal polls, following amendment of rules in 2016. Additionally, voting by migrants is being allowed for the first time, by means of postal ballots.