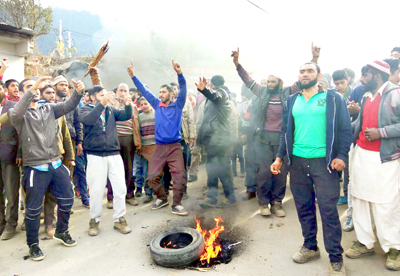 ‘Admn was aware of threat to Chanderkant’s life

Excelsior Correspondent
JAMMU, May 14: Even as the Sanatan Dharam Sabha (SDS) today gave call for bandh in Kishtwar, Bhaderwah and Doda areas for May 17 to protest the killings of Parihar brothers and Chanderkant Sharma and failure of authorities to nab the accused, it has surfaced that a high-level minority community delegation had cautioned top officials about threat to the life of Sharma and sought his transfer as Pharmacist from the District Hospital Kishtwar to three safer places.
SDS president for Kishtwar district, Hans Raj Bhutyal told the Excelsior that the Sabha, a conglomerate of all major organizations of minorities, have unanimously given a call for bandh in Kishtwar, Bhaderwah and Doda areas on May 17 as a mark of protest against the killings of prominent BJP leader, Anil Parihar and his brother, Ajit Parihar on November 1, 2018, top RSS functionary, Chanderkant Sharma and his PSO Rajinder Kumar on April 9, 2019 and failure of authorities to nab or eliminate the militants responsible for the killings.
“We also demand reshuffle in civil and police administration in the district,” Bhutyal said, adding the people have lost faith in the administration.
Meanwhile, it has surfaced that a high-level delegation of prominent Hindu leaders from Kishtwar had called on the Advisor and some top officials in the administration in Jammu in the aftermath of the killings of Parihar brothers and demanded that Chanderkant Sharma should be shifted from the District Hospital Kishtwar to any of the three safer areas including Bandarna, Bhandarkote or Dera Bhatta, which were more secure than the DH Kishtwar where he was posted.
“The request was made on November 8 i.e. a week after the killing of Parihar brothers but it was not entertained for five months till Chanderkant Sharma was killed by the militants inside the District Hospital Kishtwar along with his PSO Rajinder Kumar in the afternoon of April 9,” sources said.
They added that fears of the minority community leaders about threat to the life of Chanderkant Sharma following killings of the Parihar brothers turned out to be true as the administration paid no heed to their demand to transfer him to safer area.
Sharma had been provided three PSO, two of whom were with him at the time of killing. While Rajinder Kumar was killed in the terror attack, another PSO couldn’t cock his weapon timely. Third PSO was stated to be at the residence of the RSS leader.
“As leaders of minority community had briefed some top officials of the administration about threat to the life of Chanderkant after martyrdom of the Parihar brothers, his security too should have been upgraded by the Security wing on its own but nothing happened,” sources said.
Authorities, meanwhile, continued to investigate the role of surrendered militant ‘MD’, who was close associate of a prominent BJP leader, and was arrested sometime back with ammunition and other material. However, sources said, ‘MD’ had no role in the latest terror attacks and all militants responsible for the killings of Parihar brothers, Chanderkant Sharma and his PSO and weapon snatching from the Deputy Commissioner’s PSO, have been identified.
Investigations against ‘MD’ pertained to recovery of ammunition and verify whether he was trying to revive militancy or not and why he had kept ammunition with him at the time of surrender. ‘MD’ is stated to be very close to a BJP leader of Kishtwar.