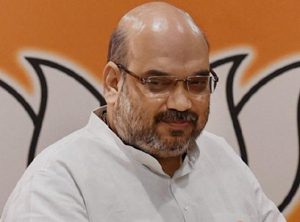 AMBIKAPUR: BJP chief Amit Shah asserted today that the SC/ST Act and the reservation system in jobs will remain in force till the party-led government is in power.
He said the election season would kick in soon and the Congress would use the opportunity to spread “lies” about the Narendra Modi government.
The main opposition party will “mislead” people by saying the NDA government will scrap the Scheduled Caste/ Scheduled Tribes (Prevention of Atrocities) Act and the system of reservation in government jobs and education for the deprived sections the society, Shah added.
“In the coming days, the Congress will spread different types of lies to mislead people. Sometimes they will say the SC/ST Act is being abolished, on other occasions they will say the reservation (system) was being scrapped.
“I want to clearly say that the SC/ST Act and reservation will remain in force till the BJP government is in power,” he added.
The BJP chief was addressing a public rally here in Chhattisgarh, which goes to the polls by the year-end. (AGENCIES)