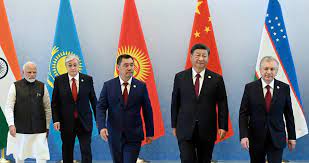 SAMARKAND, Sept 16: Prime Minister Narendra Modi, Russian President Vladimir Putin, Chinese President Xi Jinping and other leaders of the Shanghai Cooperation Organisation (SCO) on Friday deliberated on the regional security situation and ways to enhance trade and connectivity at the annual summit of the grouping.
It is for the first time Modi and Xi came face-to-face at the summit in this historic Uzbek city since the start of the border standoff between India and China in eastern Ladakh around 28 months back.
However, there is no clarity yet on whether there will be a bilateral meeting between Modi and Xi on the sidelines of the summit.
The summit is also being attended by Pakistan Prime Minister Shehbaz Sharif, Iranian President Ebrahim Raisi and leaders of several central Asian countries.
The summit of the eight-nation influential grouping is taking place amid the growing geo-political turmoil largely triggered by the Russian invasion of Ukraine and China’s aggressive military posturing in the Taiwan Strait.
Ahead of the deliberations at the restricted format of the summit, leaders of the permanent members of the grouping posed for a group photo at Samarkand’s Congress Centre.
At the venue of the summit, Modi was warmly greeted by Uzbek President Shavkat Mirziyoyev.
“President Shavkat Mirziyoyev of Uzbekistan welcomed PM@narendramodi to the Congress Centre in Samarkand for the 22nd SCO Summit. India has been working closely with Uzbekistan towards the success of their Chairship,” External Affairs Ministry Spokesperson Arindam Bagchi tweeted.
In another tweet, he said:”PM @narendramodi joins the leaders of SCO Member States for discussions on topical, regional and international issues, including regional peace and security, trade and connectivity, culture and tourism.”
After the summit, Prime Minister Modi will have separate bilateral meetings with Russian President Putin, Uzbek President Mirziyoyev and Iranian President Raisi.
Modi arrived here on Thursday night on an around 24-hour visit.
Hours before departing for Samarkand, Modi said he was looking forward to exchanging views at the summit on topical regional and international issues as well as on reform and expansion of the grouping
“At the SCO Summit, I look forward to exchanging views on topical, regional and international issues, the expansion of SCO and further deepening of multifaceted and mutually beneficial cooperation within the Organisation,” Modi said in a statement.
“Under the Uzbek chairship, a number of decisions for mutual cooperation are likely to be adopted in areas of trade, economy, culture and tourism,” he said.
The SCO was founded at a summit in Shanghai in 2001 by the presidents of Russia, China, the Kyrgyz Republic, Kazakhstan, Tajikistan and Uzbekistan.
Over the years, it has emerged as one of the largest trans-regional international organisations. India and Pakistan became its permanent members in 2017. Iran is likely to be given the status of a permanent member of the SCO at the Samarkand summit. (PTI)