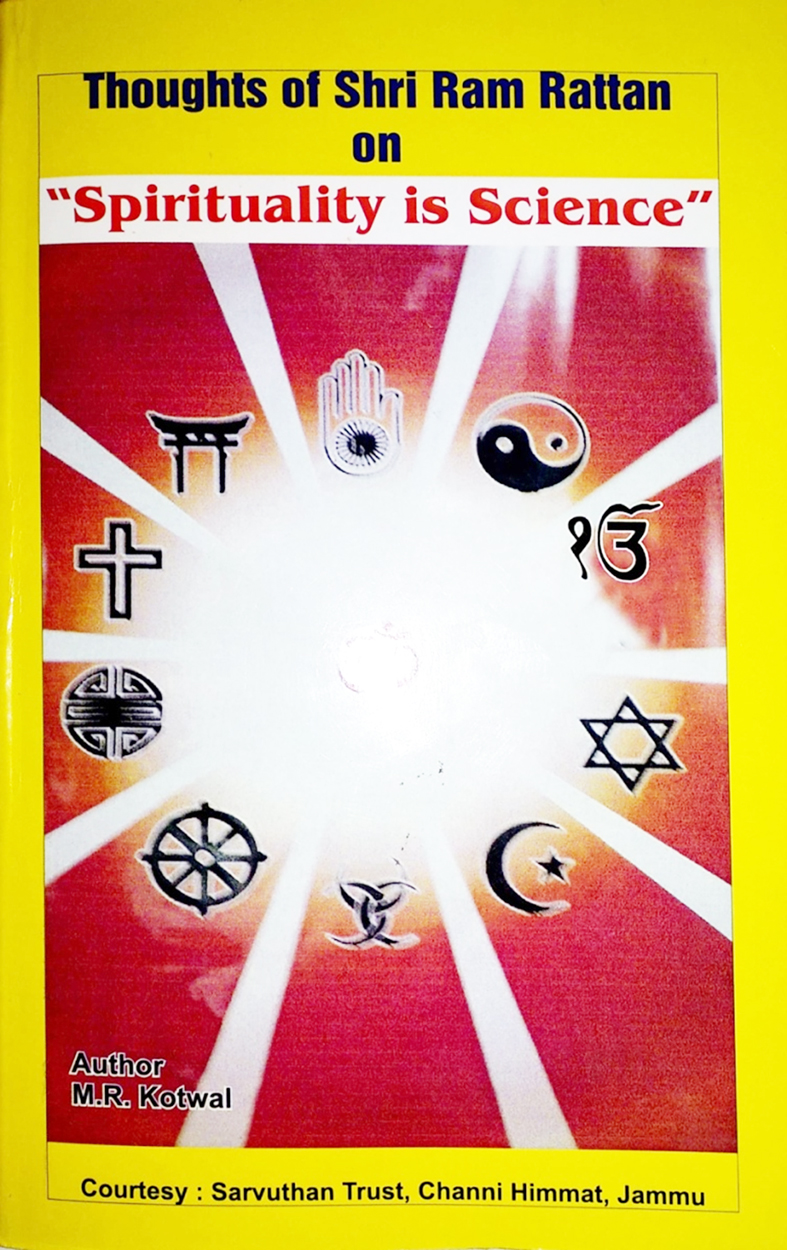 This 312 pages book in English entitled “Spirituality is Science” authored by M.R. Kotwal is based on thoughts of Dr. Ram Rattan Khajuria on spirituality expressed during various discourses, discussions and deliberations. Dr. Khajuria is former Director, J&K Milk Federation and an eminent social worker who founded some important organisations like J&K Samaj Kalyan Kendra devoted to the cause of deaf, dumb and persons with disability and some other noted NGOs.
He also remained founding president, Life Patron, Honorary Director and President of the noted NGOs like Vichar Kranti Manch International, Confederation of J&K Voluntary Social and Charitable organisation; SAWERA, which runs a high school as also Kusht Nirvaran Society in Jammu. Dr. Khajuria has rendered notable service to the society and later on turned more to spiritualism along with his scientific temper and background.
All Important Topic
The book is on thoughts of Dr. R.R. Khajuria on “Spirituality is Science”. The subject is related to spirit and the way to attain self-realization and ultimately merge with the all powerful authority- The Brahma. The difference between religion and spirituality in Chapter two of the book has been made very clearly for the benefit of the readers.
To follow the path of meditation has been dealt in detail to assimilate all virtuous qualities and shunning off the opposites (negativities) for purification of mind.
Spiritual Enlightenment
His writing in the Chapter 9, depicts the comparison of body and soul which makes valuable reading. Also the path of spiritual enlightment of a sadhak alongwith relation of Atma and Parmatma which constitutes the fundamentals of spirituality is elaborated and lucidly deliberated upon in depth.
A suggestion has been made in the book to attract the scientists and intellectuals towards spirituality by involving the famous universities/ institutions and NGOs by constituting commission at national level under the Union Ministry of Culture and HRD.
The importance of spirituality and its dire necessity in the present world  of science has been rightly stressed upon in the book not only for self-realisation and enlightenment but to attain Moksh/ Mukti by all individuals but for overall cleansing of society of evils, egos and conflicts prevailing throughout the globe.
Absorbing Reading
Depending upon a person’s ability and capacity, different ways for spirituality have been mentioned in the book for the benefit of the general relationship.
Efforts have also been made to clarify Avtaarvad viz-a-viz existance of the Creator without discrimination of any religion or state, so that whole humanity is awakened to the cause and its effect phenomenon, for overall peace, harmony and development of every human being. Dr. Ram Rattan Khajuria of J&K State, a well known figure, has remained throughout his life involved in scientific and spiritual pursuits.
In the chapter 17 of the book, emphasis has been laid to clean all the evils and misdeeds of the individuals involved by invoking the element of spirituality in them by organising special short duration courses/ seminars.
On science and spriituality the thoughts of Sai Baba and other renowned authors are worth reading for the persons interested in development of human values for the welfare and betterment of mankind.
A very interesting feature is that it has been made essential for the book reader for replacement of all personal negativities by positivities, impurities by purities, spiritual infection by perfections through sincere and serious Sadhna, perseverance and inspiring others for the same. It is really a curious way of charging the readers for this useful book.
The book has been well produced with fine printing on quality paper and in a simple language and direct easy to understand style for common readers. Both the author and Dr. R.R Khajuria have done a commendable job in creating wide-spread awakening for the uplift of the entire humanity. The volume needs to be made available to mass readership with its translation in variety of langauges, Indian as well as foreign. The book is  recommended for all the readers for spiritual enlightenment and scientific out look.
(Starline Syndicate Service)