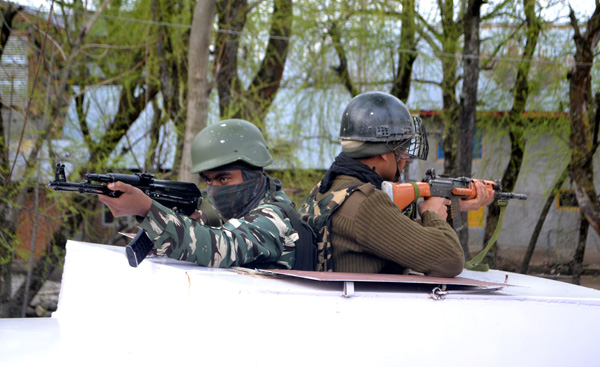 Fayaz Bukhari
Srinagar, Mar 24: Two Jaish-e-Mohammad (JeM) militants were killed in an overnight encounter at Dooru area of South Kashmir’s Anantnag district while massive searches were launched in Kupwara forests against militants.
Army’s 19 RR and SOG of Jammu and Kashmir Police laid an ambush at Singh Check Shestergam village in Dooru in district Anantang last night following inputs about the movement of some militants.

Click here to watch video
As the security forces started searches in the area, militants opened fire on the troops leading to a gun battle. Both the militants were killed in the encounter.
A police spokesman said the joint team of forces started searches at Singh Check Sheshtergam late last night and later a gunfight broke out with the hiding militants.
“Two militants have been killed and their bodies were recovered along with huge cache of incriminating material which include AK 47 rifles, grenades etc,” the spokesman said.
“Preliminary investigation suggested that both the killed militants are from Pakistan. Further based on the seizures made from the spot and other incriminating materials collected so far have confirmed that the killed militants were a part of JeM outfit,” the spokesman said.
In the encounter no collateral damage took place and forces sanitized the area, the spokesman said. A case has been registered and investigation has been taken up under the relevant provisions of the law by the police.
Meanwhile, clashes erupted at several areas including Dooru, Qazigund, Dialgam and Kulgam soon after the killing of militants.
Spontaneous shutdown was observed in Anantnag during which shops and commercial establishments remained shut while transport was also affected.
The train service to South Kashmir was suspended while as internet services were snapped in Kulgam and Anantnag districts soon after the encounter broke out last night.
Jaish-e-Mohammad (JeM) today said said that the two militants of the outfit were killed in Dooru area of Anantnag district.
In the meantime, security forces launched cordon and search operation at Darumdur in Shopian district today. Army’s 44 RR and Shopian police cordoned off the village after inputs about presence of militants.
Residents pelted stones on the security forces to disrupt the operation. Security forces fired teargas to disperse the protesters.
Security forces today launched a fresh cordon-and-search operation in Halmatpora forests of North Kashmir’s Kupwara district.
Sources said that a joint team of Army’s 41 RR and SOG this afternoon launched searches following the suspicious movement in the upper reaches of the forest area – adjacent to Check Fathekkhan of Haihama- which connects Gulgam and Awoora forest areas.
Army’s 5 Bihar and 4 Para has also launched a search operation in the peripheries of Haihama forests and its neighbouring forest areas including Gulgam and Awoora.
Massive search operations are going on in these areas to track down the two fleeing militants who were part of the group when it was intercepted at Check Fatehkhan of Halmatpora on March 20.
Five militants, three Army soldiers and two SOG personnel were killed in the operation that lasted for two-days.