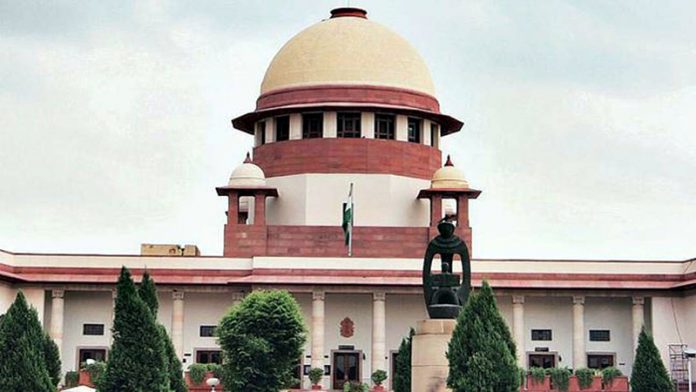 NEW DELHI, Aug 31: The Supreme Court today deferred till January next year the crucial hearing on pleas challenging the constitutional validity of Article 35 A, which provides special rights and privileges to the natives of Jammu and Kashmir, after the Centre and the State said that polls to local bodies polls there would go on till December.
A bench headed by Chief Justice Dipak Misra was told by Attorney General K K Venugopal and Additional Solicitor General (ASG) Tushar Mehta, representing the Centre and Jammu and Kashmir government respectively that the issue of Article 35A was “very sensitive” and keeping in mind the law and order aspect, the hearing be held in January or March, 2019.
“Let these matters be listed in the second week of January, 2019. All interlocutory applications shall be taken up along with the main matter,” the bench, also comprising Justices A M Khanwilkar and D Y Chandrachud, said in its order.
Venugopal and the ASG referred to the law and order situation in the state and said the polls for local bodies including the panchayats would be held in eight phases and go on till December.
Moreover, these elections were to be held necessarily, otherwise the disbursal of the fund by the Finance Commission to the tune of Rs 4,335 crore, meant for the local bodies, would be stalled, Mehta, who was assisted by Shoeb Alam and G M Kawoosa, the counsel for the Jammu and Kashmir, said.
Article 35-A, which was incorporated in the Constitution by a 1954 Presidential Order, accords special rights and privileges to the citizens of Jammu and Kashmir and bars people from outside the state from acquiring any immovable property in the state.
It denies property rights to a woman who marries a person from outside the State. The provision, which leads to such women from the state forfeiting their right over property, also applies to their heirs.
The argument seeking adjournment was advanced by the Centre and the state after the bench indicated that it would hear the petitions in September itself to decide whether the petitions challenging the validity of Article 35 A can be referred to a five-judge constitution bench.
“Large number of paramilitary forces are there. Let the elections go on calmly and thereafter hear these petitions in January or March. This issue has been very sensitive,” the top law officer said.
The plea was vehemently opposed by senior advocate Ranjit Kumar and lawyer Barun Kumar Sinha, representing petitioner NGO ‘We the Citizens’ and advocate Ankur Sharma, who said that the law and order aspect cannot be referred to as the reason for stalling the hearing of a Constitutional issue before the Apex Court.
“Let the elections take place. We are told that there is a law and order problem,” the bench observed while adjourning the hearing on the petitions.
Kumar, appearing for a group opposed to Article 35A, raised the issue of violation of fundamental rights of those who migrated to Jammu and Kashmir almost 60-years ago and said for the last 2-3 generations, they do not get benefit of employment in State Government or admissions in medical and engineering colleges.
The bench then referred to the fact that the Article in the Constituition came in 1954, whereas the petitions were filed in 2018.
The Article was incorporated in the Constitution in 1954 by an order of President Rajendra Prasad on the advice of the then Cabinet headed by Jawaharlal Nehru.
“My lords are hearing the Sabarimala case now. But the practice (of barring the entry of women) has been going on for centuries,” the senior advocate responded.
A lawyer gave an illustration and said if a native woman of the state married an outsider, she loses several rights, including property rights, in the state, but if a man marries a Pakistani women, he and his spouse both get all the rights.
The ASG, however, agreed to the contention that Article 35A and certain aspects needed to be debated upon and said, “it can’t be denied that there is an aspect of gender discrimination in it (Article 35A).
On August 6, the apex court had said that a three-judge bench would decide whether the pleas challenging Article 35A should be referred to a five-judge constitution bench for examining the larger issue of alleged violation of the doctrine of basic structure of the Constitution.
Several petitions including by political parties like the National Conference and the CPI-M, have also moved the Supreme Court in support of Article 35-A that empowers the state assembly to define “permanent residents” for bestowing special rights and privileges to them.
An NGO, ‘Ikkjut Jammu’, has also filed a plea seeking quashing of the provision. It has said that Article 35-A furthers the “two nation theory which is against the theory of secularism”.
The State Government, while defending the Article, had cited two verdicts of the constitution benches of the Supreme Court in 1961 and 1969, which had upheld the powers of the President under Article 370(1)(d) of the Constitution to pass Constitutional orders. (PTI)