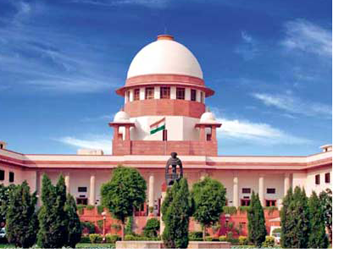 NEW DELHI: The Uttar Pradesh Sunni Waqf Board has been asked by the Supreme Court to show documents signed by Mughal emperor Shah Jahan to prove its claim that it owns the iconic Taj Mahal.

A bench headed by Chief Justice Dipak Misra asked the counsel of the board to show it documents to substantiate that Shah Jahan, who had built the Taj Mahal in the memory of his wife Mumtaz Mahal in 1631, had executed a ‘waqfnama’ in favour of the board.

Waqfnama is a deed or a document through which a person expresses intention to donate a property or land for charitable purposes or waqf.

“Who in India will believe that it (Taj) belongs to the waqf board,” asked the bench, which also comprised Justices A M Khanwilkar and D Y Chandrachud, and added that such issues must not waste the time of the Apex Court.

When the waqf board counsel told the court that Shah Jahan had himself declared it a Waqf property, the bench asked the board to show it the original deed executed by the Mughal emperor.

“Show us the signature”, the CJI told the counsel, who then sought more time to produce relevant documents. (AGENCIES)