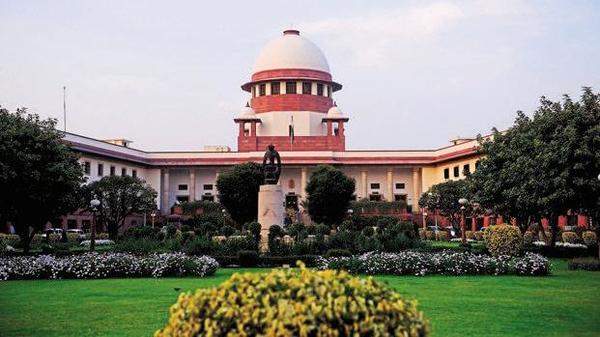 NEW DELHI, Aug 23:The Supreme Court Friday agreed to examine the validity of a newly enacted law which makes the practice of instant divorce through triple talaq among Muslims a punishable offence entailing imprisonment of up to three years.
A bench of justices N V Ramana and Ajay Rastogi issued notice to the Centre on a batch of petitions seeking to declare The Muslim Women (Protection of Rights on Marriage) Act 2019 as “unconstitutional” on grounds that it allegedly violates the provisions of the Constitution.
“We will examine this,” the bench told senior advocate Salman Khurshid, who was appearing for one of the petitioners.
Khurshid said there were many dimensions, including making the practice a punishable offence and jail term of up to three years, which need to be examined by the top court.
He said the petitioners were concerned about making the practice of triple talaq among Muslims an offence as the apex court had already declared it to be null and void.
“If there is no such thing as triple talaq then what are they making an offence,” he told the bench and referred to a five-judge Constitution bench verdict which had declared the practice of triple talaq among Muslims as null and void.
To this the bench asked, suppose if a religious practice is declared as null and void and it is declared as an offence like dowry and child marriage, but if it still goes on then what is the remedy.
Responding to the query, Khurshid said several aspects have to be examined and in the triple talaq matter the Constitution bench had already said the practice is void.
He said it has to be examined whether the religious practice denies the rights to the woman.
The bench, while agreeing to examine the validity of the 2019 Act, observed that petitioners have also raised the issue of punishment of up to three years and grant of bail to the husband only after the woman is heard by the court.
A total of four petitions have been filed in apex court challenging the validity of the law.
Two Muslim organisations Jamiat Ulama-I-Hind and ‘Samastha Kerala Jamiathul Ulema’, a religious organisation of Sunni Muslim scholars and clerics in Kerala, have moved the Supreme Court this month challenging the law’s validity.
Jamiat Ulama-I-Hind approached the apex court on Thursday.
President Ram Nath Kovind has given assent to the Act which makes ‘talaq-e-biddat’ or any other similar form of talaq having the effect of instantaneous and irrevocable divorce pronounced by a Muslim husband void and illegal.
In the plea filed through advocate Ejaz Maqbool, Jamiat Ulama-I-Hind has claimed that since the pronouncement of talaq by a Muslim husband upon his wife had already been declared “void and illegal”, there was no requirement to enact the law.
“However, the impugned Act criminalises the act of pronouncement of talaq by a Muslim husband and makes it a cognizable offence, without appreciating that such pronouncement had already been declared unconstitutional and amounted to nullity in the eyes of law,” the plea said.
Referring to the provision of the Act which stipulates punishment of up to three years jail along with fine, the plea said it is an “ill-conceived provision which imposes excessive and disproportionate punishment.”
It claimed that “criminalising a mode of divorce in one particular religion while keeping the subject of marriage and divorce in other religions only within the purview of civil law, also leads to discrimination, which is not in conformity with the mandate of Article 15”.
Article 15 of the Constitution deals with prohibition of discrimination on grounds of religion, race, caste, sex or place of birth.
The plea said that punishment prescribed under the Act “is not only disproportionate but extremely excessive and stringent”. (PTI)
Referring to other offences punishable under the Indian Penal Code (IPC), including rioting, bribery and causing death by negligence, the plea said that lesser punishment has been prescribed for many offences “which are far graver”.
It said that section 7 of The Muslim Women (Protection of Rights on Marriage) Act, 2019 makes the pronouncement of talaq, having the effect of instantaneous divorce, a cognisable and a non-bailable offence. (PTI)
The plea said that offences like kidnapping, causing death by negligence and bigamy, are bailable “which show that making the pronouncement of instantaneous talaq non-bailable is excessive and evidently unwarranted”.

The plea said that marriage is civil contract as per the Islamic Law and talaq is only a mode to repudiate the contract and imposition of criminal liability for a civil wrong violates the fundamental rights of Muslim men.

It said that “object of punishment must not be to wreak vengeance but to reform the criminal as to prevent him from further crime.”

The plea said that the Act, by providing for imprisonment of the husband, fails to ensure cordiality in marriage and would lead to “irretrievable breakdown” of the wedlock.

It said pronouncement of ‘triple talaq’ is considered invalid in several Islamic countries but no punishment has been prescribed for this.

The Act makes it illegal to pronounce talaq three times-spoken, written or through SMS or WhatsApp or any other electronic chat-in one sitting.

“Any pronouncement of talaq by a Muslim husband upon his wife, by words, either spoken or written or in electronic form or in any other manner whatsoever, shall be void and illegal,” the law says. (PTI)