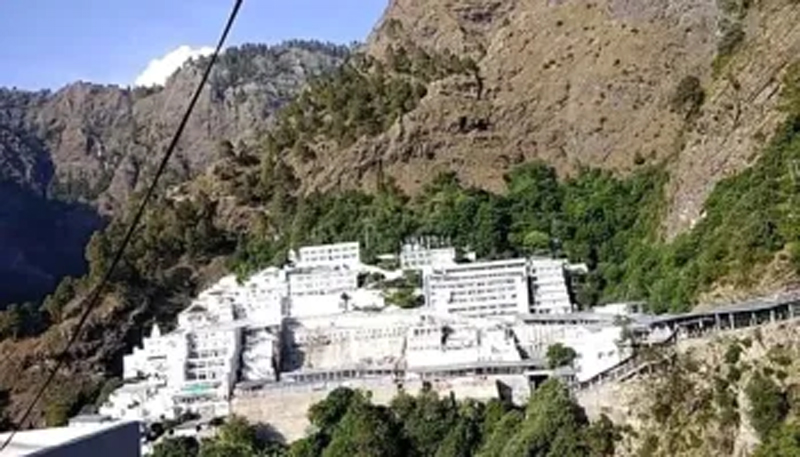 Excelsior Correspondent
JAMMU, Jan 2: Lieutenant Governor Manoj Sinha today chaired a special meeting of Shri Mata Vaishno Devi Shrine Board (SMVDSB) at Raj Bhavan, wherein several important decisions were taken to ensure safety of the pilgrims.
The meeting was convened in the backdrop of an unfortunate incident of stampede that occurred at Shri Mata Vaishno Devi Bhawan in the intervening night of 31st December, 2021 and 1st January 2022.

Dr. Ashok Bhan; Justice (Retd) Permod Kohli; Maj. Gen (Retd) S K Sharma; K K Sharma; K B Kachru and Vijay Dhar- Members of SMVDSB and Ramesh Kumar, Chief Executive Officer (CEO), SMVDSB attended the meeting.
Dr. Arun Kumar Mehta, Chief Secretary and Nitishwar Kumar, Principal Secretary to the Lt Governor were special invitees to the meeting.
The Lt Governor, who is also the Chairman of SMVDSB, critically reviewed the causative factors leading to the stampede incident and the various steps taken immediately thereafter by the management of Shrine Board.
The Board appreciated the commendable post-incident efforts of Shrine Board, district administration and police personnel towards the quick rescue and timely shifting of injured to Shrine Board’s Hospital at Kakryal. The Board felt that as a consequence of these efforts, a number of lives were saved. The board was briefed by the CEO Shrine Board that 35,000 pilgrims were allowed to proceed for the Yatra on December 31 and January 1 as against the National Green Tribunal’s cap of 50,000 a day, keeping in view the pandemic.
While reviewing the status of release of compensation amount to the victims, the Board decided to provide an additional amount of Rs 5 lakhs each to the next of kin of the pilgrims who lost their lives in the unfortunate tragic incident. An ex-gratia of Rs 10 lakhs was already announced by the Lt Governor on January 1.
A slew of directives were issued for physical and systematic improvements wherever required after critical examination.
The Board directed the Chief Executive Officer, Shrine Board for taking urgent action on diverse fronts including effective crowd management, augmentation of infrastructure, making booking of yatra 100% through online mode; working out plans for decongestion of the entire track, particularly the Bhawan area, separation of entry and exit routes at Bhawan.
He emphasized on appropriate use of technology and putting in place RFID Tracking system for effective crowd and queue management.
The Lt Governor advised for roping in technical experts and adopting best crowd management practices.
The Board directed the CEO for making concerted efforts towards early implementation of the Master Plan for the Bhawan area in a phased manner strictly in accordance to the timelines and also reiterated for expediting construction work and early completion of Durga Bhawan for the pilgrims.
Directions were issued for carrying out required improvisations in 2nd and 3rd Phase of Master Plan to take care of all foreseen challenges.
The Board discussed the modalities for suspension bridge and skywalk for effective queue management, besides identifying more halting spots to cater to large crowd at Bhawan and Katra.
The Board also considered various suggestions for making requisite improvements that can be carried out to safeguard against similar mishaps in future.
Discussions were also held on exploring possibilities of ropeway from Katra for the aged and infirm pilgrims.
The CEO was asked to consider resumption of the token/group number system that was discontinued six years ago. The Board also directed for early undertaking of an exercise for critically examining the safety audit of physical infrastructure and fire safety at main Bhawan, shopping complex and other important areas. The Members of the Shrine Board will monitor the implementation of directions and works to be undertaken.
The meeting ended with two minutes of silence, praying for the pilgrims who lost their lives in the stampede.