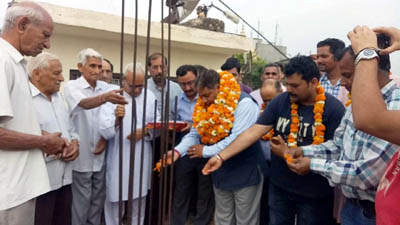 Excelsior Correspondent
JAMMU, Mar 29: With a vision of making Jammu West a model constituency, BJP State president and MLA Sat Sharma (CA) provided funds through CDF for the construction of community hall at Vishwakarma Sabha, Gurah Bakshi Nagar.
The construction of this community hall is undertaken in the interest and benefit of public at large. Sharma was accompanied by a large number of people including Jammu Municipal Corporation (JMC) officials, general public and local leaders.
The community hall will be constructed under the supervision of JMC at an estimated cost of Rs 12 lakh which are provided by MLA through his Constituency Development Fund (CDF) scheme.
Speaking on the occasion, Sat Sharma said that it was long pending demand of the Vishwakarma Sabha that a community hall be constructed which can accommodate large number of people. The community hall can be used by the needy and general public for various programmes and functions as there is no such facility nearby. Sharma said that the development of the constituency is my top priority and every possible work is being done to make Jammu West a model constituency of the State.
He also assured the public that various schemes have already been undertaken and public at large have also been benefitted which has helped majorly in improving the life style of needy segment as well. He also stated that benefits from more schemes of Central and State Government will also be provided to people who are in dire need and such an initiative will bring a major boom in overall development of Jammu West Assembly segment.
Sharma also toured the area during which the public brought various issues to his notice which were sought immediately.