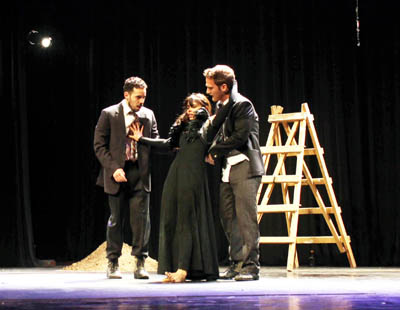 Lalit Gupta
JAMMU, Mar 29: Seeking an empathetic relationship, between performer and spectator on the issues of vital human importance, the English play, ‘The Last One’, staged by Galiana & Nikolchev’s The Useless Room, a group from United States of America, at the Abhinav Theatre, here today, raised the bar of artistic standards due to its avant-garde form as well as content.
With text dramaturgy by Anthony Nikolchev, direction and choreography by Gema Galiana, ‘The Last One’, came out a treat for theatre aficionados of the winter capital for its innovative movement-based performance that seemed enlarge the repertoire of the physical theatre genre as such.
A unique amalgam of dance and corporeal mime, accentuating the vital importance of the body and physical action on stage, today’s metaphor based theatre piece despite the text, allowed the actors greater autonomy to communicate at the visceral level through their strength, flexibility, and imaginative power. Thus transcend the borders of geography, ethnicity, language to successfully express abstract and universal ideas.
According to actor/director, the need to create such a play came after to her watching a documentary in which she could see the very last Kauai »ô»ô bird, a male, recorded singing a mating call, to a female that would never come. The last »ô»ô bird died in 1987. This was the provocation, the starting point to explore the ideas of destruction, beauty and the truth in it.
Today’s electrifying performance by Gema Galiana and two other actors will surely remain etched in the memory of spectators for long for the manner it showcased the unique universal and timeless potential of the human body as a powerful tool of expression so as to stir emotions and responses in an audience.
Tomorrow on the ninth day of the ongoing Jammu Chapter of Theatre Olympiad, the Hindi play Jangal Mein Khulne Wali Khirki’ will be staged by Rangayan, Bhopal under the direction of Prashant Khirvadkar.