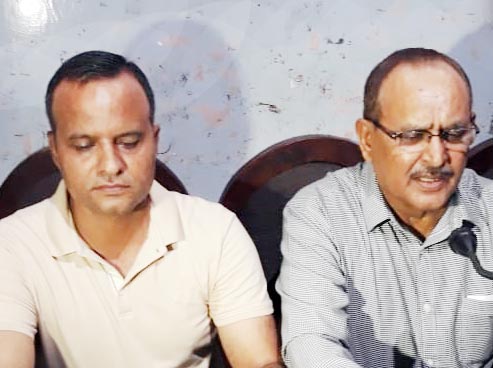 Excelsior Correspondent
JAMMU, July 7: Ex-Servicemen Club, Sainik Colony Jammu has expressed grave concern over the grabbing of land by the mafia in collaboration with the revenue officials in the heart of the Sainik Colony.
Talking to reporters here, today Master Warrant Officer (retd) Khajur Singh, Captain (retd) Tirath Ram, Captain (retd) Khemanand, K S Jasrotia, Gulshan Sethi and Sainik Colony Businessman Association, president, Rakesh Choudhary said the mafia has grabbed the land in heart of Sainik Colony which was awarded by Government to soldiers and war widows in 1971.
They said the total land was 4400 kanals and one Khud was dividing Sainik Colony.  The owner of this Gair Mumkin khud was the Government so the money was paid to Government and later it was developed by Sainik Colony making roads parks and bunds on both sides of the khud. The electric poles and pipes were laid and later it was awarded to soldiers and widows but in year 2012 land mafia managed the power of attorney of the Gair Mumkin Khud and with the help of some Revenue officials destroyed the roads, drains parks and demolished the houses of soldiers. One Master Warrant Officer, Khajur Singh’s house and Captain (retd) Tirathram’s  house who belongs to Punjab Regiment was also damaged, they added.
They said Tirathram’s son is also serving in army on border at present but he too was not spared.  The land mafia encroached some part of land meant for Government hospital, power house and Mini Stadium. The mafia  is also going to capture the ground in which Dussehra is held and it is moving step by step ahead to encroach the entire Sainik Colony with the help of some revenue people. The soldiers and  windows are requesting the Governor, N N  Vohra to depute Advisor in the area and give justice to soldiers and widows those who are displaced and are houseless. 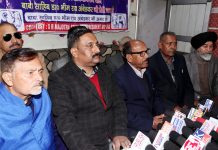 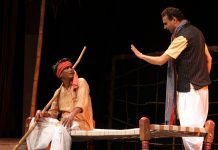