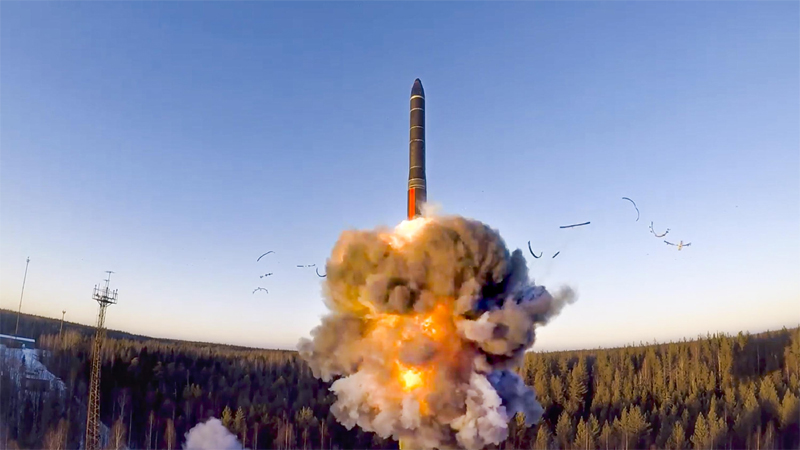 KYIV, Feb 20: Hundreds of artillery shells exploded along the contact line between Ukrainian soldiers and Russia-backed separatists, and thousands of people evacuated eastern Ukraine, further increasing fears today that the volatile region could spark a Russian invasion.
Western leaders warned that Russia was poised to attack its neighbour, which is surrounded on three sides by about 150,000 Russian soldiers, warplanes and equipment.
Russia held nuclear drills Saturday and conducted conventional exercises in neighbouring Belarus, and has ongoing naval drills off the coast in the Black Sea.
The United States and many European countries have alleged for months that Russia is trying to create pretexts to invade. They have threatened massive, immediate sanctions if it does.
Ukrainian President Volodymyr Zelenskyy called on Russian President Vladimir Putin to choose a place where the two leaders could meet to try to resolve the crisis. Russia has denied plans to invade.
“Ukraine will continue to follow only the diplomatic path for the sake of a peaceful settlement,” Zelenskyy said at an international security conference in Munich, Germany. There was no immediate response from the Kremlin.
A top European Union official, Charles Michel, said Sunday that “the big question remains: does the Kremlin want dialogue?” “We cannot forever offer an olive branch while Russia conducts missile tests and continues to amass troops,” Michel, the president of the European Council, said at the Munich Security Conference. He said, “One thing is certain: if there is further military aggression, we will react with massive sanctions.” (Agencies)