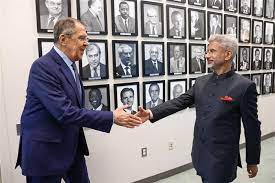 NEW YORK, Sept 25: Describing Russia as a “major partner in many domains”, External Affairs Minister S Jaishankar has said discussions with his counterpart Sergey Lavrov focused on “bilateral cooperation” as well as the conflict in Ukraine.
“We discussed a number of issues. Some part of my meeting was focused on our bilateral cooperation because Russia is a major partner in many domains,” Jaishankar said. He was responding to a question by PTI on his meeting with Lavrov as he spoke to a group of Indian reporters here Saturday after wrapping up the New York leg of his visit to the US with his address to the UN General Assembly high-level session.
Just hours before his address to the UN General Debate, Jaishankar had a bilateral meeting with Lavrov on the margins of the high-level session. “A wide-ranging conversation with FM Sergey Lavrov at #UNGA 77. Discussed our bilateral cooperation. Exchanged views on Ukraine, G-20 and UN reforms,” Jaishankar had tweeted.
Responding to the question, he said while “obviously” there are big issues, which focus both the Russians and the rest of the world, the relationship has to address its own requirements, processes and objectives.
“We spend some time on the bilateral side, where things are, taking stock,” he said, adding that they also spoke in “some detail” about issues related to Ukraine.
“A lot of it was he briefed me about various developments from the Russian perspective. I also shared with him what I picked up from some of the others. So that was a back and forth conversation,” he said.
He said there was also a discussion on the G-20, with India beginning the G-20 presidency this December. “Russia is very much at the centre of debate where G-20 is concerned. And finally, we spoke about the UN reform.”
The meeting in New York is the fourth between Jaishankar and Lavrov this year, including in Bali on the sidelines of the G-20 foreign ministers’ conclave in the Indonesian city of Bali and when Lavrov was in New Delhi earlier this year.
In response to a question on his meeting with Ukraine’s Prime Minister Denys Shmyhal this week on the UNGA margins and what were the concerns articulated by the leader, Jaishankar said “a big concern was the conflict itself. He gave me his perception, his assessment of what was happening in Ukraine.
“In terms of India, we had a discussion on what was our position and my sense is that he clearly appreciated the fact that we were against the continuation of the conflict and for the return for dialogue and diplomacy,” Jaishankar said adding that Shmyhal had his own views on why this was not happening.
The humanitarian assistance issue was also discussed and Shmyhal brought up some specific aspects of the ground situation, which he believed were concerns for the international community as a whole, including discussion on the progress on the grain issue, the concern about fertilizers, nuclear power plant issue.
With the months-long Ukraine conflict raging on, India told the UN General Assembly that it is on the side of peace and on the side that calls for dialogue and diplomacy as the only way out.
“As the Ukraine conflict continues to rage, we are often asked whose side we are on. And our answer, each time, is straight and honest,” Jaishankar said in his address to the high-level UN General Assembly session here Saturday.
He underlined that it is in the collective interest of the international community to work constructively, both within the United Nations and outside, in finding an early resolution to this conflict.
Delivering the national statement, he said in this conflict India is on the side of peace and will remain firmly there.
“We are on the side that respects the UN Charter and its founding principles. We are on the side that calls for dialogue and diplomacy as the only way out,” he said.
“We are on the side of those struggling to make ends meet, even as they stare at escalating costs of food, fuel and fertilizers.
At various UN platforms like the UN Security Council and the General Assembly, India has mostly abstained on resolutions on the Ukraine conflict.
In his address, Jaishankar voiced concern over the sharp deterioration in the international landscape. “The world is already struggling with challenges of post pandemic economic recovery. The debt situation of the developing is precarious.
“To this, is now added the rising costs and shrinking availability of fuel, food and fertilizers. These, along with trade disruptions and diversions, are among the many consequences of the Ukraine conflict.
He added that the repercussions of the ongoing Ukraine conflict have further heightened economic stresses, especially on food and energy. (PTI)