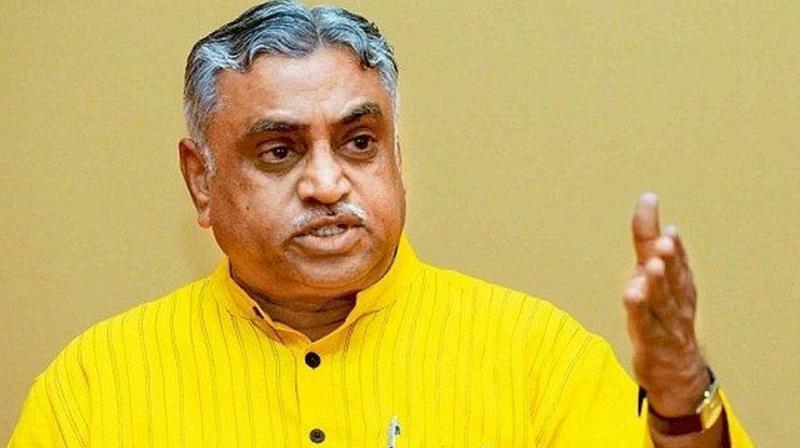 Nishikant Khajuria
JAMMU, Jan 30: Amidst speculations over conducting the State Assembly elections along with Lok Sabha polls , RSS top functionary Dr Manmohan Vaidya held a high level meeting with the senior most BJP leaders and Sangh Parivar representatives in Jammu and Kashmir, here today.
During the closed door meeting, Dr Vaidya is learnt to have taken feedback about the ground political situation in all three regions of the State and BJP preparedness for the forthcoming Lok Sabha elections, which are likely to be held by April-May, this year.
Even as Dr Vaidya also sought an opinion on suitable timing for holding Assembly elections, there was no unanimity among the participating Sangh Parivar representatives and BJP leaders over the issue, sources told the Excelsior.
While some of the participants from BJP favoured holding of simultaneous polls, others opined that continuation of the President rule for a few more months would help the party to further consolidate its position at ground level and undo the damage caused to it because of coalition partner PDP, sources added.
The meeting was attended by RSS Prant Pracharak Rupesh Kumar, Prant Pramukh Brig Suchet Singh, Parshotam Dadichi, Goutam Mengi, State BJP president Ravinder Raina, general secretary (Organization) Ashok Koul, Union Minister Dr Jitendra Singh, Speaker Dr Nirmal Singh, former Deputy Chief Minister Kavinder Gupta, MP Jugal Kishore Sharma, MP Shamsher Singh, Dr Narinder Singh and others.
Dr Manmohan Vaidya, who is RSS Sah Sarkaryavah (National Joint General Secretary), arrived here this morning and left for New Delhi in the afternoon after taking feedback about the State political scenario, preparedness for the elections and the Sangh Parivar activities in J&K.
According to the sources, the meeting at RSS headquarters in Jammu began around 11 a.m. and continued for around two hours, during which Dr Vaidya also sought feedback on BJP performance in the recently held Panchayt and Local Body elections in J&K, which would help in assessing the party position at ground level.
Besides the mood of border area residents, the issue of Ram Temple at Ayodhya and its impact on BJP prospects in the forthcoming elections also came up in discussion during the meeting, sources added.
Aiming on election preparedness, sources said that the RSS Sah Sarkaryavah stressed on affective coordination between different wings of the Sangh Parivar for consolidating the organizations’ reach among masses.
Within a month, this was the second visit to the State by any top RSS functionary for a feedback and assessing political situation ahead of elections. Last month, Bhaiyaji Joshi, who is considered at number two in RSS hierarchy after supremo Mohan Bhagwat, had visited the State.
Meanwhile, coinciding with the visit of Manmohan Vaidya, maiden meeting of the State BJP Election Management Committee was also held here today for discussing the party strategy to intensify the poll campaign in Jammu and Kashmir.
BJP national vice-president and Incharge J&K, Avinash Rai Khanna, who is also head of the Election Management Committee, chaired the meeting , which was held at the party Headquarters and attended by all members of the committee.
Sources said that different dimensions of the poll campaign and strategies for activating the party workers through Kamal Shakti Abhiyan, Kamal Jyoti Sankalp and Kamal Sandesh etc, were discussed in the meeting.
Another meeting of the Election Management Committee will be held tomorrow for continuation of the discussion over the poll campaign strategy, sources added.