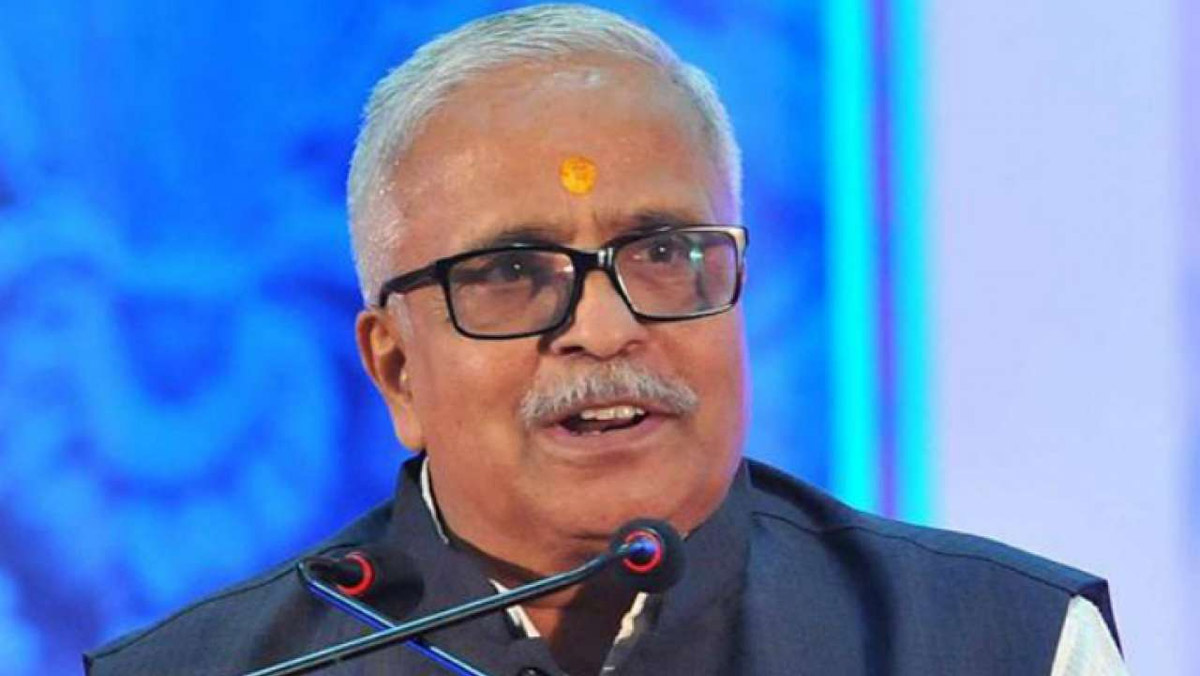 JAMMU, Jan 13: Expressing total solidarity with the people of Ladakh region, Rashtriya Swayamsevak Sangh (RSS) has strongly favoured protection of Ladakhi culture and boosting educational system in the Himalayan region as per the wishes and aspirations of the people.
This was conveyed by RSS Sarkarivah (national general secretary) Suresh Ji popularly known as Bhaiya Ji Joshi while addressing a meeting of RSS Pracharks and Working Committee members from Ladakh UT here today.
According to sources, Bhaiya Ji Joshi, who showed keen interest in development of Ladakh region while assuaging the feelings of the Ladakhis during the meeting said Sangh is solidly behind them and wanted the region should prosperous and become developed part of India.
Sources said Sangh leader took complete feedback from the Pracharks of Ladakh ad said that for the preservation of culture and bettering of educational facilities in the region, Sangh will redouble its efforts. However, on the implementation of 6th Scheduled for the region, he said the decision in this connection is to be taken by the Government and expressed the hope that tangible solution will materialize in this regard also.
Sources said the Pracharks from Ladakh including Ladakh Karivah, Vijay Chillgippa gave complete feedback to Sangh national leaders over the situation in the region especially after the formation of Union Territory on October 31 in 2019. They said that the developmental projects launched during the time of former Prime Minister, Atal Behari Vajpayee are incomplete and this has been a cause of public resentment in the region. They stressed that the work on these projects should be launched on war footing and be completed in a stipulated time frame as was the vision of former PM, sources added.
They said the Working Committee members from the region said that all these projects are standstill like construction of Leh to Zanaskar motorable road, solar power projects and Manali to Leh road. They stressed on starting of work on these projects besides the steps be taken for socio-economic status of the people living on LAC and LoC by launching various schemes for their upliftment.
The Pracharaks from Ladakh said the road from Manali (HP) to Kailong has been made all weather road but the distance of 120 kilometers from Kailong to Leh is incomplete.
Sources said the Pracharks of Ladakh, while apprising the national leaders of the problems of the people in the region said there is high tech development on the other side in China in Damchuk belt while the people on this side still live in Kacha houses. But not minding it they are still nationalists to the core. They stressed that the steps be taken for their economic upliftment, sources added.
Sources said during the meeting, Bhaiya Ji Joshi stressed that efforts be also made to bridge the gulf with Kargil as Sangh is for the upliftment of all communities and all regions. It’s main goal is making India a developed country so that its status of Vishaw Guru is restored.
Sources said Bhaiaya Ji Joshi and Dr Manmohan Vaidya also held the meetings with BJP leaders from J&K which was also attended by Union Minister, Dr Jitendra Singh and party national general secretary and Prabhari for J&K and Ladakh UTs, Tarun Chug. Besides, party president, J&K Ravinder Raina, general secretary (Org), Ashok Kaul, former Deputy CMs, Dr Nirmal Singh and Kavinder Gupta were also present in the meetings.
Dr Jitendra Singh and Ashok Kaul were present in all meetings which Sangh leaders held with J&K and Ladakh Pracharks. They briefed Bhaiya Ji Joshi and Manmohan Vaidya on political situation in the UT post abrogation of Articles 370 and 35 -A and bifurcation of erstwhile State into two UTs and performance of the party in recently concluded District Development Council (DDC) elections.
However, the national leaders of RSS stressed on more concentration in those areas of Jammu region where the BJP did not show its good performance in the DDC elections.
Sources said the issue of return and rehabilitation of Kashmiri Pandits was also discussed in the meeting and Bhaiya Ji Joshi said present Government has shown its commitment towards their return and rehabilitation to Kashmir Valley. “The Government at Delhi as well as UT Government is very positive in this regard and efforts should be made to link the third generation of Kashmir Pandits residing outside the J&K with their roots culturally with which they have lost the connection over the years”.
Sources said Bhaiya Ji Joshi informed the meeting that earlier governments of National Conference (NC) and Peoples Democratic Party (PDP) were not interested in their rehabilitation and return and all policies programmes in this regard fell through but present Government is totally positive and committed in this regard.
RSS Kshtriya Pracahrak Banwar Lal and former Prant Pracharak J&K and senior leader of Sangh, Arun Kumar was also present in the meeting. Tomorrow, the national leaders of Sangh will meet Pracharks and working Committee members and BJP leaders from Kashmir.