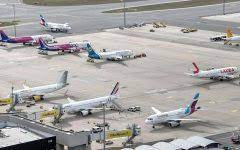 JAIPUR, Aug 17: The Rajasthan Small Industries Corporation (RSIC) is planning to set up an air cargo complex at the Dabok airport in Udaipur to facilitate import and export of goods in the next few months.
At present, businessmen based in the lake city of Udaipur and nearby places are required to travel to Ahmedabad or Jaipur for import and export purposes.
RSIC, a Government of Rajasthan undertaking, had forwarded a proposal to the ministry of civil aviation which has been given in-principle approval and the land for the project has also been identified.
RSIC Chairman Rajiv Arora said the work on the complex will soon start and it is expected to be commissioned by early next year.
Udaipur is a hub of handicrafts.
Apart from handicrafts, building stones and mineral products are also exported from the region.
The city is also emerging as a top wedding destination in the state and many items like fruits, vegetables, flowers, and other items, which are not available locally, are imported.
Since there is no facility for the air cargo complex at Udaipur, the businessmen have to go to the nearest airport in Ahmedabad (Gujarat).
In Rajasthan, the facility of the air cargo complex is available at the Jaipur airport only.
“With the air cargo complex in Udaipur, the local businessmen will not be required to go to Ahmedabad or Jaipur to get the facility. This will save time and resources for the businessmen and it will help the local business,” Arora told PTI.
He said that the complex will be set up in an area of close to 2,000 sq metres for which the land has been identified at the Dabok airport and it will take nearly six months to get ready once all formalities are completed.
“I recently visited Udaipur and held a meeting with the officials of the Airport Authority of India at Dabok Airport regarding the project. The work will be done in a fast-paced manner so that it can be completed in the timeframe,” he added.
RSIC plays a major role in promoting handicrafts produced in the state.
The corporation is operating Inland Container Depots (ICDs) at Jaipur, Jodhpur, and Air Cargo Complex at Sanganer, Jaipur. (PTI)