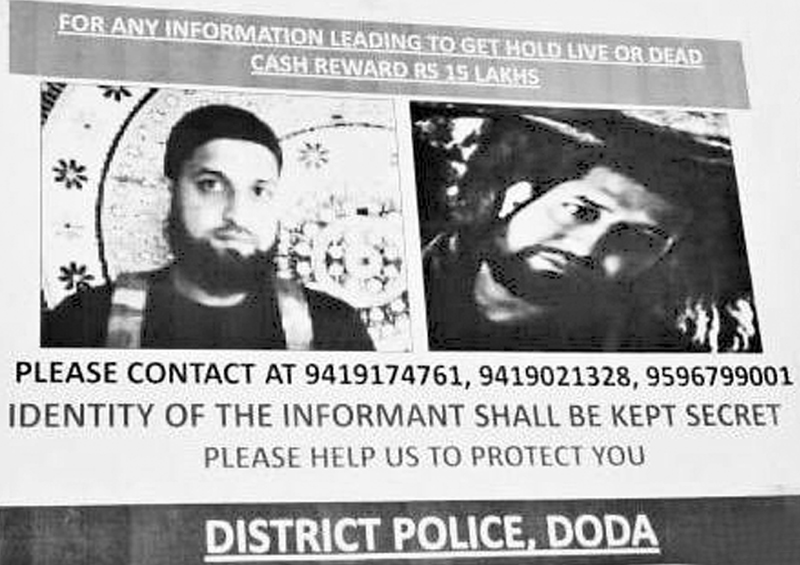 Excelsior Correspondent
JAMMU, Oct 22: Police today announced a cash prize of Rs 15 lakh on any information leading to the capture of two alleged Hizbul militants, dead or alive, suspected to be operating in Doda district, which had been declared free of terrorism over a decade ago.
The announcement of the cash prize for the capture of two alleged Hizbul Mujahideen terrorists, Haroon Abbass Wani of Ghat village and Masood Ahmad of Dessa village, was made in “wanted — dead or alive” posters, stuck by police at various places in the hilly district.

Doda along with many other districts in Jammu region had been declared terrorism-free over a decade ago.
“For any information leading to get hold live or dead – cash reward Rs 15 lakhs,” read the posters, also carrying the pictures of the duo.
The posters ended with a message: “Identity of the informant shall be kept secret. Please help us to protect you.”
The posters, pasted in the main markets, outside two banks and a wall near the local police station, also carried three mobile numbers for informing police.
Though no militancy-related incident was reported in the district over the past several years, this is the first time that police have announced a reward for capturing a terrorist in the district.
A master of business administration degree holder from Shri Mata Vaishno Devi University, 30-year-old Wani joined the banned outfit in September last year, while Ahmad became an active member of the group about five months ago, the officials said.
They said security forces have been conducting search and cordons operations at various places in the district over the past few weeks on information that some terrorists have become active in the district. However, the security forces have got no success in nabbing any terrorist till now.
Wani’s picture with an AK-47 rifle had gone viral on social media soon after he allegedly joined the Hizbul Mujahideen, prompting his family to make a passionate appeal for his return.
“The biggest jihad is to serve elderly parents. There is no need for jihad as we are happy,” his aunt had said in a video message, adding his decision has left them ashamed.
“Your mother and father has fallen sick and they need you very badly. Please return.”