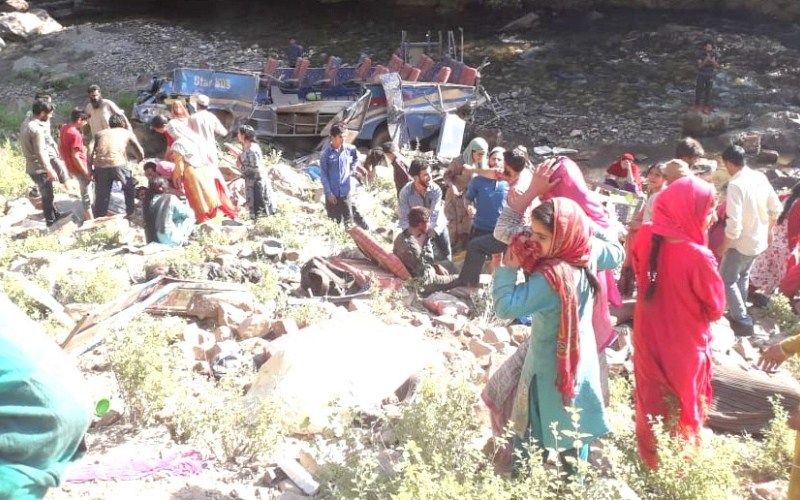 338 lives lost in terror incidents in 2 yrs, 1006 in one year mishaps
Mohinder Verma
JAMMU, July 28: Unbelievable it may sound but it is a fact that tragic road accidents are swallowing more lives in comparison to several decades’ long militancy in Jammu and Kashmir and this new type of challenge is baffling both the civil and police administration as situation is deteriorating with every passing year.
This can be gauged from the official figures vis-a-vis casualties and fatalities in the terror related incidents in the length and breadth of the State during past two years and the lives lost in the road accidents in one year only, the copy of which is available with EXCELSIOR.
As per the data, a total of 338 civilians, Jammu and Kashmir Police cops, personnel of Central Paramilitary Forces and Army lost their lives in terror related incidents in different parts of the State during 2017 and 2018.
Of these, 166 security forces personnel and civilians lost lives in 2018 and 172 in 2017 while as a total of 740 personnel and civilians sustained injuries in these two years in terror related incidents. Out of these 740 persons, 350 got injured in 2018 and 390 in 2017.
While there was decline in the terror related incidents in 2018 in comparison to 2017, the road accidents witnessed sharp rise in the length and breadth of Jammu and Kashmir during this period. This can be gauged from the figures, which reveal that a total of 5627 road accidents took place in 2017 and the number increased to 6001 in 2018.
There was an increase of 374 road accidents in 2018 as compared to previous year and Kathua, Rajouri, Samba, Ramban, Doda, Srinagar, Anantnag, Baramulla, Budgam, Kupwara, Leh, Awantipora and Sopore remained the worst affected districts.
As per the data, road accidents swallowed 1006 lives and rendered 7718 persons injured during 2018 only and these figures clearly indicate that tragedies on roads claim much more lives in Jammu and Kashmir than the militancy, which is going on during the past several decades.
“These figures reveal that checking tragic road accidents has become a new type of challenge for the civil and police administration of the State unlike militancy, which is being tackled with the active support of Central Paramilitary Forces and Army”, independent observers said.
They further said, “only State administration has to devise a strategy to bring down the number of accidents and ensure strict enforcement of laws”, adding “if all the concerned authorities continue to maintain blind eye towards these figures the situation will continue to worsen day by day and roads particularly in the hilly areas will continue to witness naked dance of death”.
Sources said, “it is a matter of serious concern that despite being aware of these startling figures the Government has yet not come up with the measures to bring down the number of accidents taking place every year in every nook and corner of the State”.
It is pertinent to mention here that soon after the tragic road accident in Kishtwar early this month the Government had announced that all the reasons behind such tragic accidents would be probed thoroughly and strong decisions would be taken in the next State Administrative Council meeting to ensure strict action against those responsible for avoidable incidents.
However, till date neither strong decisions have been taken nor recommendations made after holding of inquiries into major accidents taken seriously and this aspect was exclusively highlighted by EXCELSIOR few days back.
“Even no major headway has been made on the directions of the Governor regarding taking away unfit vehicles and untrained drivers off the road although everybody knows that most of the accidents take place due to careless and untrained drivers, who drive without any regard for rules and regulations”, sources informed.
They further said, “what to talk of devising strategy even presence of Traffic Police and Motor Vehicle Department personnel in hilly and accident prone areas has not been increased till date despite formal submission of requirement in this regard”. They hoped that new challenge will be taken seriously by the Government so that number of accidents is also brought down and innocent lives are saved.