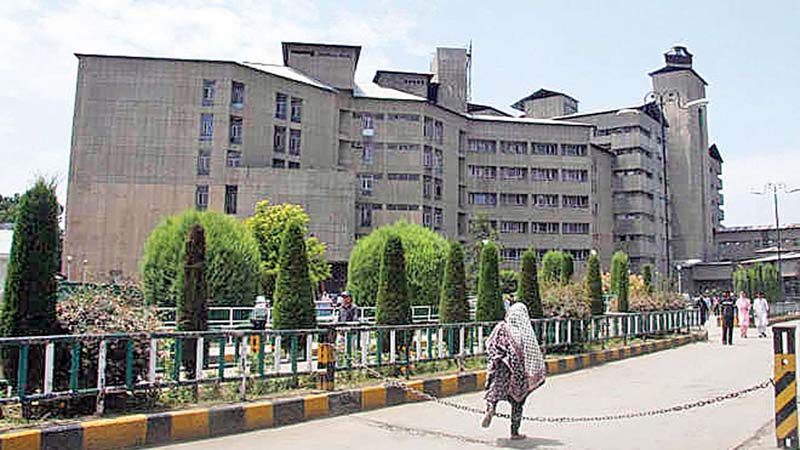 The automated Ribonucleic acid (RNA) extractors which were installed to scale up the testing and reduce manpower deficiency remained dysfunctional for the last 15 days at Sher-e-Kashmir Institute of Medical Sciences in Kashmir.
The official associated with the testing told Excelsior that the machines were installed in the COVID-19 lab of the hospital, which receive samples from across the Valley, to improve testing facilities and share the burden of the staff. However, they said, the machines were non-functional for last 15 days. “What is the purpose of spending huge amounts of money on buying these machines when they are not made functional? The same money would have been utilized for some other purpose,” an official said.
The Institute procured two RNA extractors in the last five months to ramp up testing and decrease the workload of the staff in the Valley’s leading hospital. However, both the machines remain idle most of the time since they were placed in the COVID 19 lab of the hospital which puts a question mark on the purpose of procurement.
At present, viral RNAs are isolated using an RNA extraction kit, which is done manually. As a result, the time is taken which limits the number of samples that get processed per day or the staff is forced to work for longer hours to complete the day’s work. In a day, around 2000 tests are conducted in COVID 19 lab of the hospital with the help of two 8-member teams. The machines would have given a breather to the testing staff by reducing their working hours.
Official sources in the hospital told Excelsior that the machines were procured without any consultation with the result the machines develop technical snags every now and then. “The machines develop technical snags after working for some days which affects the functioning of the whole lab. If they are not helpful now what is the purpose of buying them. There should be a proper audit of the procurement process,” an official said.
He added that the performance of the machines was not checked before buying. For example, the performance of the first machine, which was procured around April this year, was below par. “The machine was slower than the human workforce in the lab. It could carry around only 96 extractions in five hours while our team would manually extract around 150 RNAs,” he said. The second machine which was procured, he added, last month was useful, “it could carry 30 extractions in 50 minutes which is impressive. But the machines went dead only after one day,” he said.
Officials associated with the testing told Excelsior that the machine would have doubled the rate of testing and halved the workforce, “there are different stages of testing and it normally takes four hours for a single test. The RNA extractors will save almost half of our time,” an official said.
As the testing prolongs, doctors and technicians involved in the process have to work for extended shifts in the lab to complete the day’s work. For example, the team that works on the second shift or night shift has to work non- stop for 18-hours to get all the tests done. “Sixteen hours shift is too long. We get exhausted and are unable to give our best. After all, we too are human beings and need breaks. The authorities must look into it,” a doctor said.
When contacted, Director SKIMS, A G Ahangar, said that the machines are working. “They are working and we are conducting tests regularly,” he added.
An official, however, said a minor technical glitch has rendered the machines ineffective. “We are facing problems in its initialization. It is not a big issue, but we have to call the Engineers from outside to fix it. The hospital administration has already taken up the issues with the manufacturing company. The company will send a Software Engineer in the next few days,” he said.