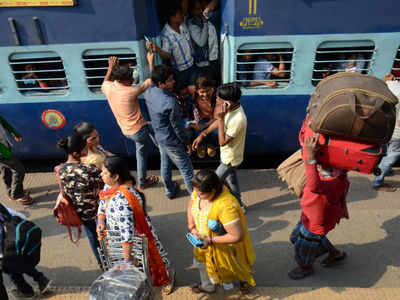 NEW DELHI: Under fire for its proposal to enforce a three-decade-old rule to penalise passengers for carrying excess baggage, the railways has now shelved the plan, saying it was only to generate awareness among travellers.

The national transporter had launched a six-day drive from June 1 to check for excess baggage but the decision to strictly enforce the rule to fine passengers up to six times the stipulated luggage weight had led to widespread criticism with people taking to social media to denounce the move.

According to Railway Ministry spokesperson Rajesh Bajpayee, the drive was merely to make people aware of how carrying excess luggage causes inconvenience to other travellers.

“It was felt that in the heavy summer rush, passengers carrying excess luggage cause much inconvenience to fellow passengers. Hence, a special education-cum-awareness drive was launched,” he said.

The drive was meant to inform passengers about the provisions regarding free baggage allowance, the maximum luggage that can be carried and other provisions, Bajpayee said. (AGENCIES)