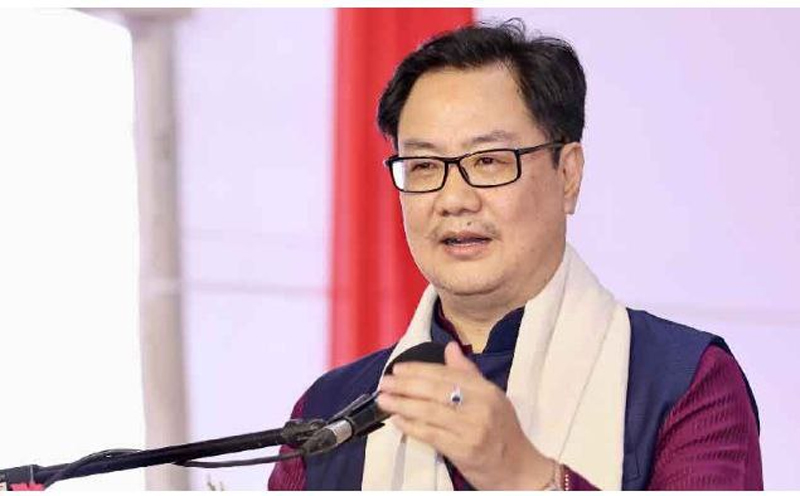 NEW DELHI, Jan 24:
Union Law Minister Kiren Rijiju today said it was a “matter of grave concern” that certain portions of sensitive reports of the Intelligence Bureau and the Research and Analysis Wing were put in public domain by the Supreme Court collegium.
He said intelligence agency officials work in a secret manner for the nation, and they would “think twice” in future if their reports are made public.
“It will have an implication,” he said.
The Minister was responding to questions on some recent Supreme Court collegium resolutions, which contained portions of the IB and RAW reports on certain names reiterated by the top court for appointment as High Court Judges, being made public last week.
This is for the first time the government has reacted to portions of these reports put in public domain by the SC collegium.
The collegium had reiterated the names to the Government earlier this month while rejecting the intelligence inputs.
“Putting the sensitive or secret reports of RAW and IB in public domain is a matter of grave concern on which I will react at an appropriate time. Today is not the appropriate time,” Rijiju told reporters at a Law Ministry event here.
Asked whether he would ‘sensitise’ Chief Justice of India D Y Chandrachud in this regard, the Law Minister said he often meets the CJI.
“We are always in touch. He is the head of the judiciary and I am the bridge between the Government and the judiciary so we have to work together. You cannot work in isolation,” he said.
The SC collegium had referred to “adverse comments” of the Intelligence Bureau (IB) while reiterating the name of advocate R John Sathyan as a Judge in the Madras High Court.
It had also referred to inputs by the Research and Analysis Wing (RAW) with regard to its recommendation to appoint advocate Saurabh Kirpal as a judge of the Delhi High Court.
The collegium had reiterated its recommendation to elevate Kirpal as a Judge.
“From letters of the Research & Analysis Wing (RAW) dated 11 April, 2019 and 18 March, 2021, it appears that there are two objections to the recommendation which was made by the Collegium of this Court on 11 November, 2021 approving the name of Saurabh Kirpal namely: (i) the partner of Saurabh Kirpal is a Swiss National, and (ii) he is in an intimate relationship and is open about his sexual orientation,” the resolution had noted.
Rijiju also referred to certain statements and tweets by politicians and lawyers slamming him for lowering the dignity of the top court by commenting on the collegium — the memorandum of procedure to appoint Judges — and the National Judicial Appointments Commission Act which was struck down by the apex court.
He said while appointments are an administrative issue, judicial pronouncements are “totally different”.
“I am not commenting, or nobody should make any kind of comment when it is a judicial order. Some people may say that certain remarks are made which compromise the independence of the judiciary. So let us be very clear.
“When we are talking about the appointment process — this is an administrative matter. This has nothing to do with judicial order or pronouncement,” he said.
Rijiju had recently described the collegium system as being something “alien” to the Indian Constitution.
This week, he had shared portions of an interview of a retired High Court Judge who had claimed that the Apex Court “hijacked” the Constitution by deciding to appoint judges itself. (PTI)